10 Unity Ceremonies for Any Couple’s Wedding

While unity ceremony ideas are not mandatory in planning a wedding these days, plenty of people like to do them because it visually represents two people and their families becoming a union.

You and your spouse may want to weave an Non-traditional unity ceremony into it because you want a personalized and romantic visual representation of your union. Or maybe you want to incorporate your guests into the wedding ceremony too.

On the other hand, maybe you and your spouse want your wedding ceremony to incorporate your religion(s) and cultural values into your wedding.

Either way, union ceremonies are a great way for everyone to participate in bringing you and your spouse together as a married couple.

In this article, you will find beautiful unity ceremony ideas to fit your wedding.

What is a Unity Ceremony?

A unity ceremony is a meaningful ritual that is done during the wedding ceremony. The bride and bridegroom symbolically represent how they have become a union.

When To Have a Unity Ceremony

Now, when exactly do you have your unity ceremony? It’s certainly a part of the wedding ceremony. The basic idea behind a unity ceremony is to symbolize two people coming together.

Essentially, there is no right or wrong answer here, it all depends on the couple.

Typically, couples will either stick to tradition or create their own unity ceremony that fits them better.

Traditionally, it happens after you exchange vows

The popular phrase, ‘actions speak louder than words’, is very applicable here. Two people saying and writing down on paper that they will be together for the rest of their lives is a valid way to form a union.

But there is something very romantic in showing two people finalizing their union by visually showing their friends and family how they are now a couple in a symbolic ceremony.

In various cultures and religions, a unity ceremony will happen after the couple exchanges their vows.

After a couple says their ‘I do’s’, it is very symbolic to go through the visual motion of two people joining together as one in marriage.

Non-traditionally, it can happen anytime in the wedding you deem appropriate

Even for those that want a traditional unity ceremony, it does not have to be after the ‘I do’s’ and before the exchange of rings. It could be before, during or after the wedding ceremony.

It all depends on the couple and what sort of unity ceremony they want.

For those of you that want traditional unity ceremony ideas, below are several ideas on how people symbolize their coming together as a couple from around the world. 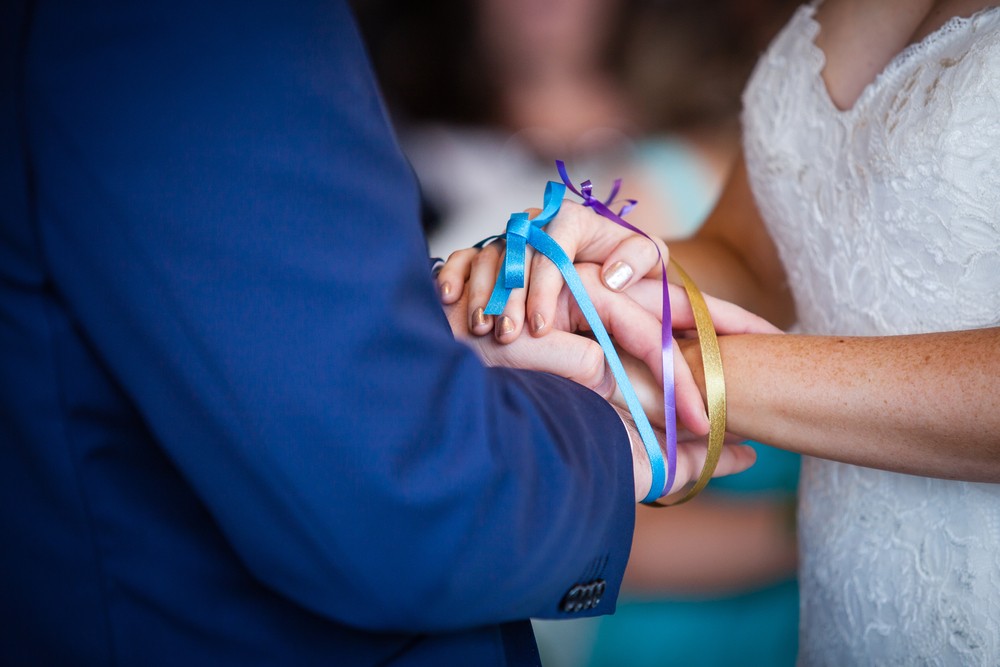 In this tradition, the right hands of each spouse are tied, or fastened, together by a rope for a part of the wedding ceremony. The person marrying the two people together will typically read the vows as the couples hands are bound together.

Everyone at the wedding can see that two people are coming together as one in both words and actions. Being bound together literally symbolizes two people ‘tying the knot’!

This type of unity ceremony is great for all those who who want to literally tie their knot in front of their friends and family.

Circling is a very popular Jewish unity ceremony wedding tradition. It is specifically a part of the Jewish Ashkenazi tradition!

Traditionally, the bride circles around her bridegroom seven times. These days, both the bride and the groom can circle around each other seven times.

This symbolizes both the creation of a new family and it symbolizes how the couple is surrounding each other with love and protection.

Whether you are Jewish or not, this is a great unity ceremony idea anyone can use.

Lighting of a Unity Candle 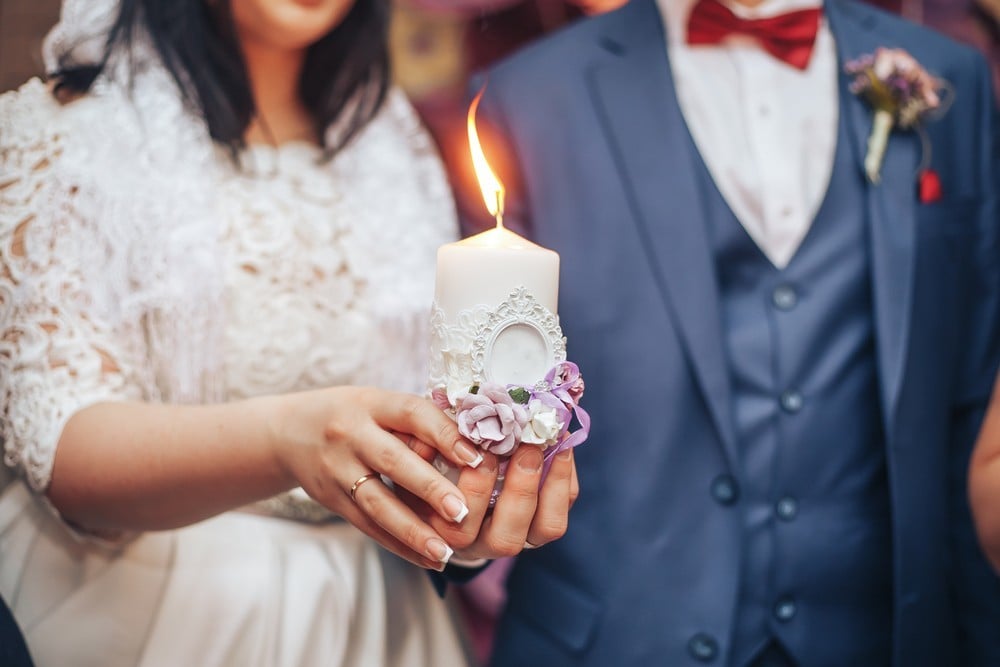 Lighting a candle is considered the most common unity ceremony. Traditionally, the mothers of the bride and bridegroom each take a lit candle and light one big candle, representing the merging of two families.

A Lasso ceremony is practiced in Mexico, Philippines and Spanish cultures and it takes place after the vows have been exchanged.

The person in charge of marrying the couple is the one who typically takes a garland of flowers or a rosary and puts it over the couple. He (or she)  then twists it into an infinity symbol.

This represents the couple’s love and coming together as a union. At the end of the ceremony, the infinity symbol is taken off the couple by the person in charge of the vows.

The newlywed couple can then keep this symbol to be a visual representation of their love and union together.

It is a beautiful idea for a unity ceremony, even for people who are not of the culture who traditionally have the ceremony this way!

Braiding of the Cross

The Braiding of the Cross idea is a Christian tradition for a unity ceremony. It is based on Ecclesiastes 4:12: “Though one may be overpowered, two can defend themselves. A cord of three strands is not quickly broken”. This comes from the Old Testament.

In this unity ceremony, the groom holds three cords/ ropes and the bride braids them. The three cords represent the bride, bridegroom, and God. The braid that is created at the end of this symbolizes the unending strength and bond they have together as one unit!

As with the other traditional unity ceremony ideas, this one is not just for those that want a religious wedding. Tying together three cords to represent the strength of your relationship as a married couple is a beautiful idea for any couple and any type of wedding.

In this section of the article, fun and romantic unity ceremony ideas will be explored.

These ideas can be used at any sort of wedding for couples that want to show their love and commitment to each other as they wed.

For those of you that want to do something very creative, you and your loved one can pour sand into a vase or a jar.

A unity sand ceremony can be done with different types of sand or sand that is dyed different colors. Either way, everyone should be able to see that the different sands are coming together as one!

The bride and bride groom can simultaneously pour sand into the clear container of their choice.

After they have been married, the couple can keep the container of sand as a symbol of their unity as a married couple.

This idea is also very good for couples with children. The new blended family can symbolically show how they are coming together as one family unit that can not easily be separated!

Definitely make the sand look different for everyone that is participating, you want the finished product to look mixed and colorful!

Want to do something really romantic with your partner for your unity ceremony? A time capsule or a memory box is a really cute and personal way to show everyone how in love and devoted you are to each other.

For this ceremony idea, you simply collect all the sweet, happy, and loving memorabilia of your time spent together before marriage. This can include movie stubs, concert tickets, love letters, photographs, etc. Before  you have exchanged vows, you can put all these items of love and affection in a box or container in front of your audience.

This can be a great time for you and your spouse to talk about how the two of you first met and how your love for each other has grown and strengthened. After all the item have been placed in a box, the couple can exchange their vows to each other.

The box can then be kept and opened every anniversary, so they will always have and remember the early stages of their love.

Unity tree planting is a great idea to do after the vows and rings have been exchanged. Best done in their own or familial home, the couple takes a tree seed (or any sort of plant/ flower seed  of their choice) and plants it together in the yard.

The seed represents the beginning of their loving married life together.

As the plant grows, it will represent their growing and consistent love for each other. Each branch, flower or leaf that emerges from this plant shows how their love is growing and includes other people (in-laws, children, grandchildren, etc.) in their lives as a couple.

For all those couples that want to increase the fun and have drinks during their wedding ceremony, custom wine blending for a unity ceremony is a great idea!

It will probably be best done after the vow and rings have been exchanged.

In this ceremony, the bride and bridegroom take their favorite wines (make sure you do your research on which wines can come together for this one), and pour them in the same glass or a new bottle of its own.

Passing of the Rings

This idea will include everyone present at the wedding.

After the vows have been said, and before the rings have been exchanged, the bride and the bridegroom’s rings can be passed to each person at the wedding so they can say a prayer or well wish that the newlyweds have a happy and loving married life together.

Not only will this ceremony include everyone in it, it is a sweet and symbolic way to give a great start to a marriage.

As you can see, there are many wonderful unity ceremony ideas you can choose from. No matter what kind of wedding you want to have, the ideas suggested here will be a lovely way to symbolize the  love and connection the newly weds have for one another.

13 Real Life Castles That You Can Get Married In