Marriage is one of the seven Sacraments in the Catholic Church. This means that Catholics consider the marriage ceremony to be not only a promise between bride and groom but a promise to God that their marriage will be faithful and fruitful.

If you’re unfamiliar with Catholic marriage rites, learn about Catholic wedding traditions and rituals you may see at the ceremony. 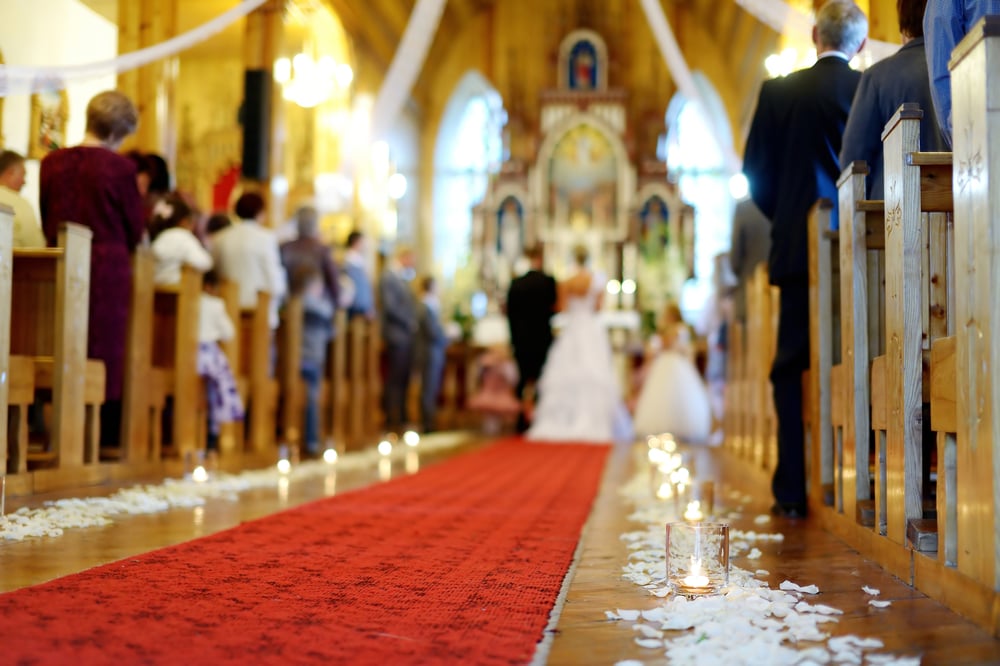 The Catholic wedding ceremony takes place at church, often combined with an entire celebration of Mass. Because the wedding vows are a promise made to God and the church community, the traditions and customs are very important in a Catholic wedding. 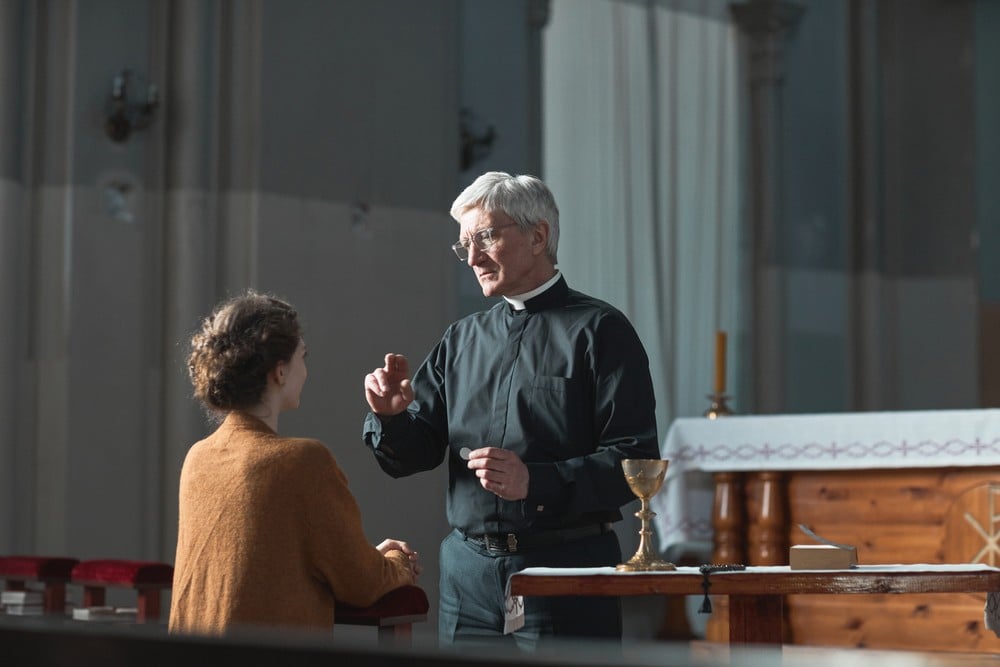 Simply put, Pre Cana is a course that couples take to prepare for marriage. The name comes from the town of Cana, where Jesus performed his first miracle at a wedding, turning water into wine.

Pre Cana varies from parish to parish. Sometimes it involves a course taken over a day or a weekend. The couple will meet with a priest or a deacon a few times to complete the course.

Engaged couples in the Catholic Church need to take a marriage prep course to ensure that they know what marriage entails and to discuss important marriage-related topics. 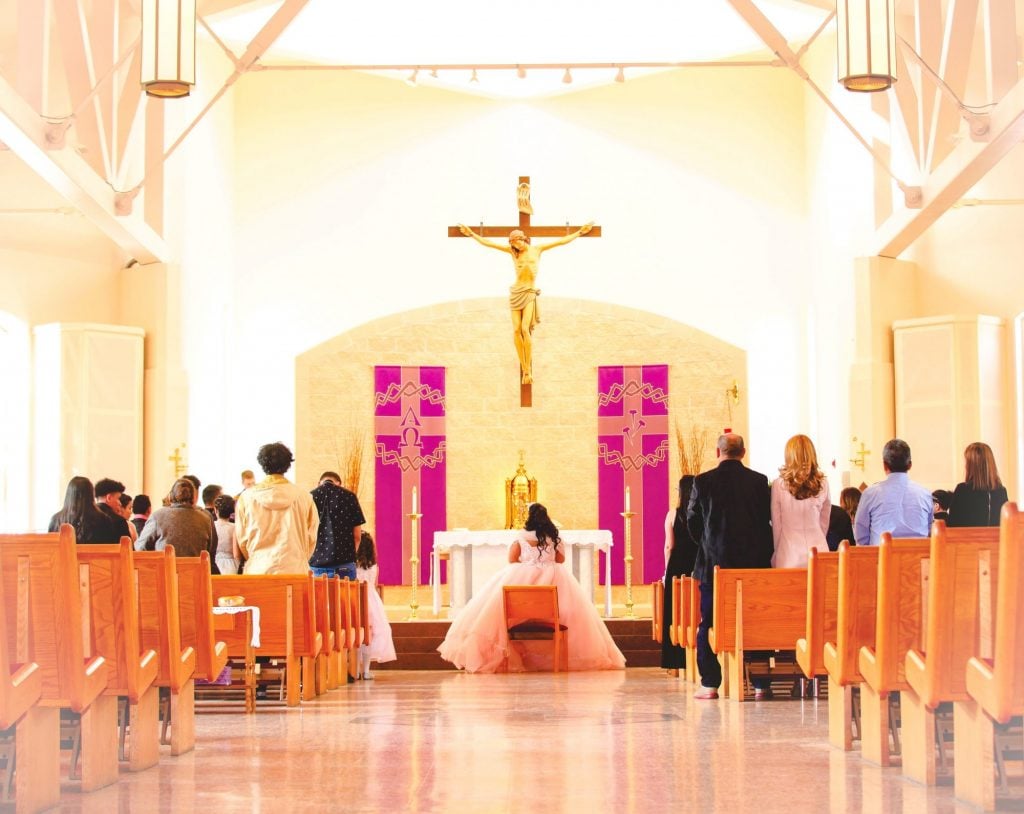 A Catholic wedding ceremony usually takes place at the home church of the bride or groom. Typically, because marriage is a Holy Sacrament, Catholic couples get married in their place of worship.

If you want to celebrate your Catholic wedding ceremony somewhere else, you have to get permission from your bishop. Most non-church weddings are not considered official by the Catholic church. 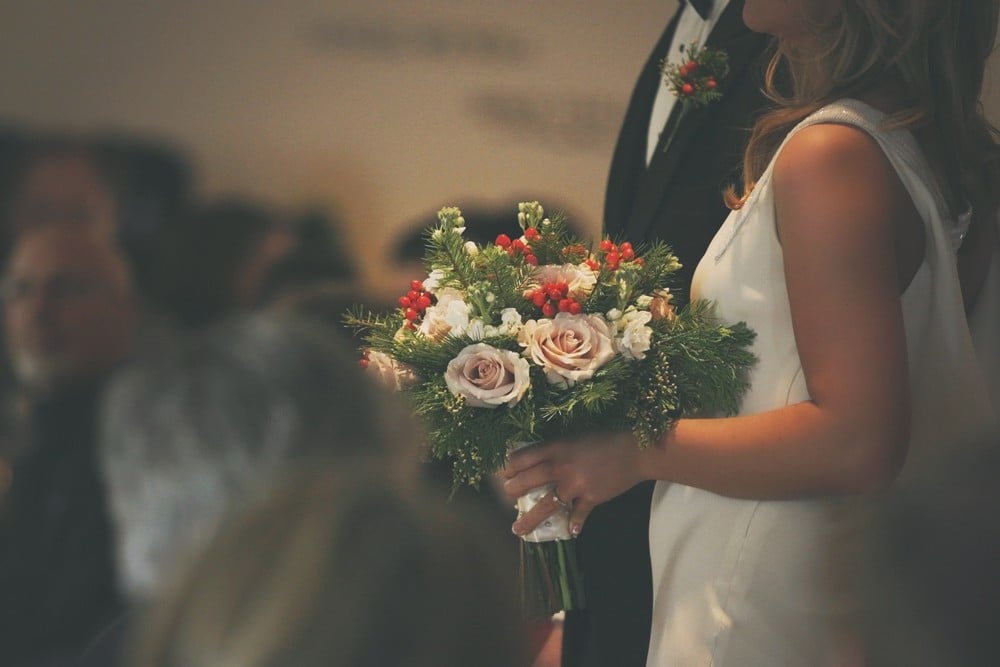 We all know what a wedding procession looks like. In a Catholic wedding, the procession is very similar. The servers and the priest enter first, as they would in a regular mass. The groom will typically be in the church already and will come to stand below the altar when the wedding party is about to enter.

The people included in a wedding party and procession can vary. Some weddings have ring bearers and flower girls. Others include the mothers of the bride and groom escorted by a groomsman or a male family member. You aren’t required to have any of these extra people in your procession, but it is an option.

Next, the groomsmen and bridesmaids process in a pair at a time, followed by the Best Man and Maid of Honor. Members of the wedding party may enter their pews at the front immediately, but they may also stand up at the front to wait for the bride. It’s all a matter of personal choice.

Finally, the bride processes into the church, sometimes escorted by her father. This is one of the most well-known Catholic wedding traditions. The bride’s father brings her to the groom and ceremonially “gives her away” to the lucky husband-to-be.

The greeting is similar to the beginning of a normal Catholic mass. The priest will bless the congregation and say a special prayer for the bride and groom.

Another option is a Celebration of Marriage, which includes readings and a homily before the marriage vows, but no Communion ceremony.

Liturgy of the Word 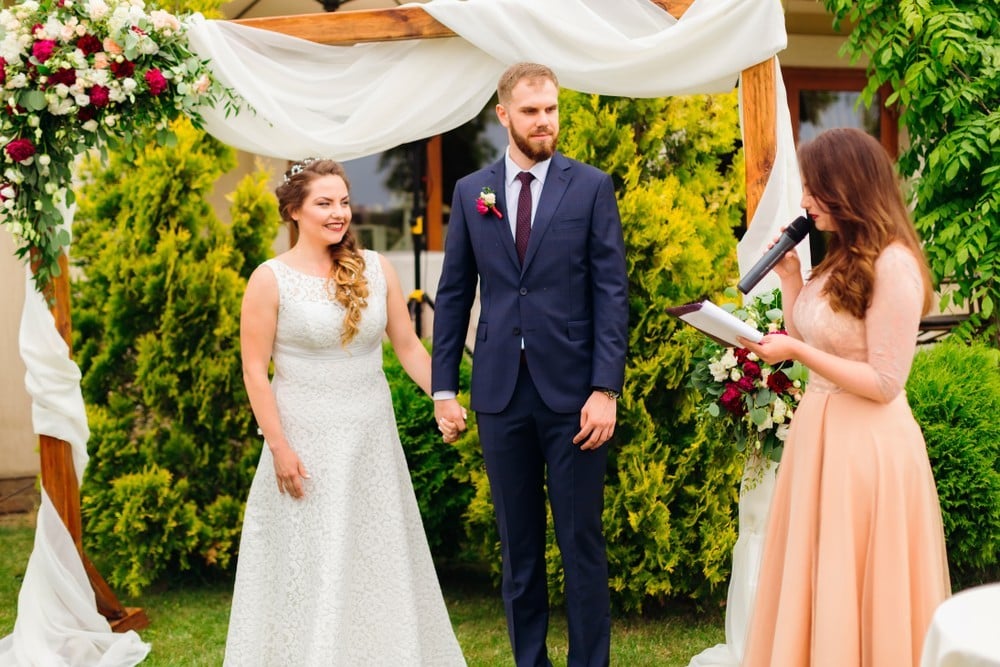 The wedding couple may choose the readings for their wedding mass. Often a family member will read the readings. After the readings, the priest will give a homily, often touching on the sanctity of marriage. 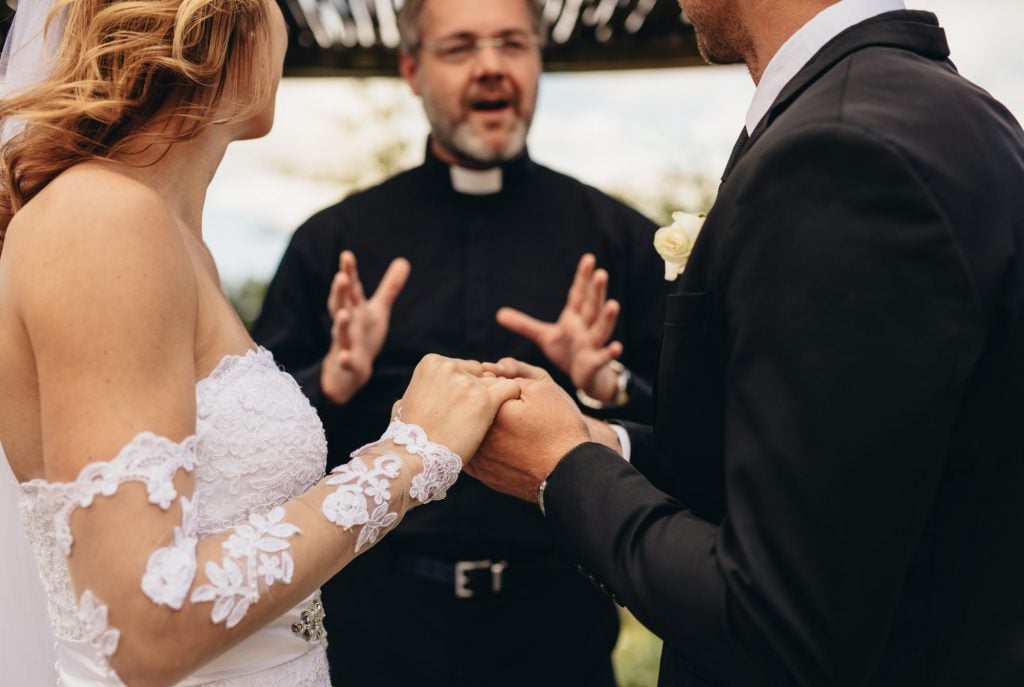 After the readings, the couples exchange marriage vows. The typical wording is something like this: “I (name) take you, (name) to be my wife/husband. I promise to be true to you in good times, in sickness, and in health. I will love and honor you all the days of my life.”

The priest will join their hands, sometimes covering their joined hands with his stole, and speaks the blessing. He will ask them, “Do you take (name) to be your lawfully wedded wife/husband, from this day forward, for better or for worse, for richer or for poorer, in sickness and in health, to love and cherish until death do you part?”

If all goes according to plan, both the bride and the groom will respond “I do” to this question. 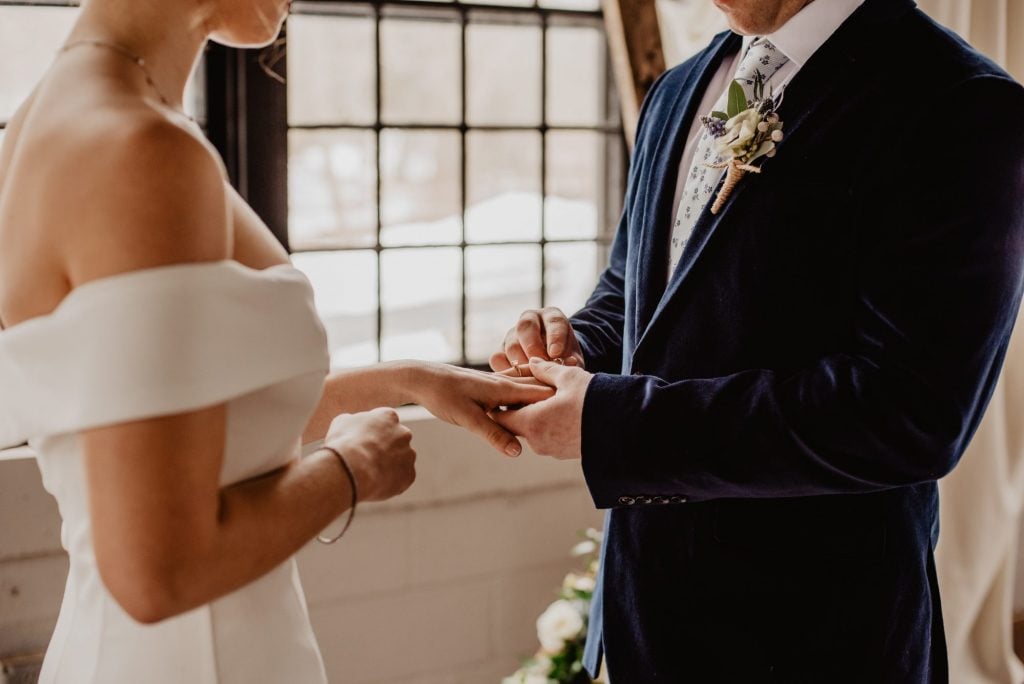 The priest blesses the rings and gives them to the bride and groom. The bride and groom each place a ring on the other’s finger, saying, “Take this ring as a sign of my love and faithfulness in the name of the Father, the Son, and the Holy Spirit.”

After the gifts of bread and wine are brought up to the altar, the priest will lead the congregation in the Lord’s Prayer, or the Our Father. 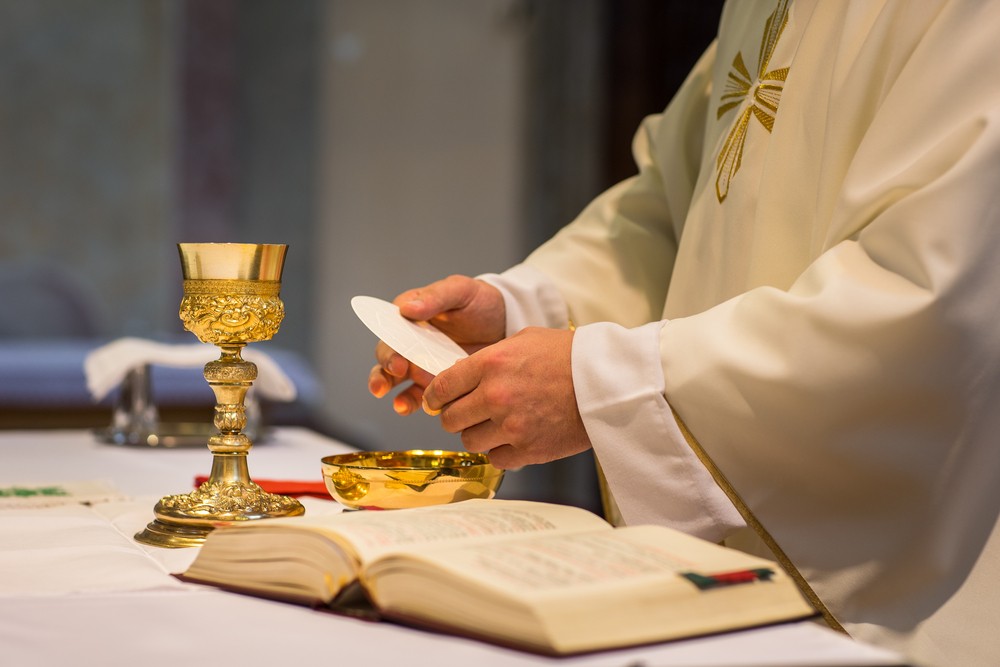 During the Communion rite, the priest will often speak a special blessing for the bride and groom. Besides that, Holy Communion goes the same way it always does in a Catholic Mass, with the priest blessing the bread and wine as Jesus did at the Last Supper before his crucifixion.

Holy Communion is not only a memorial of Jesus’ death for the sins of the world, but Catholics also believe that through the unfathomable power of God, the bread and wine on the altar becomes the Body and Blood of Christ. It still looks and tastes like bread and wine, but Catholics have faith that Jesus is there.

Everyone at the wedding may come forward for Communion. Non-Catholics attending the ceremony may come forward, but they must cross their hands over their chest and receive a blessing from the priest rather than receive the Body and Blood. This is not to exclude non-Catholics, but to show proper respect to God and His Church.

Once the congregation has returned to their pews and has had a moment to pray, the priest says the final blessing to the married couple and dismisses the congregation, saying, “Go in peace to love and serve the Lord.” The congregation replies, “Thanks be to God.” 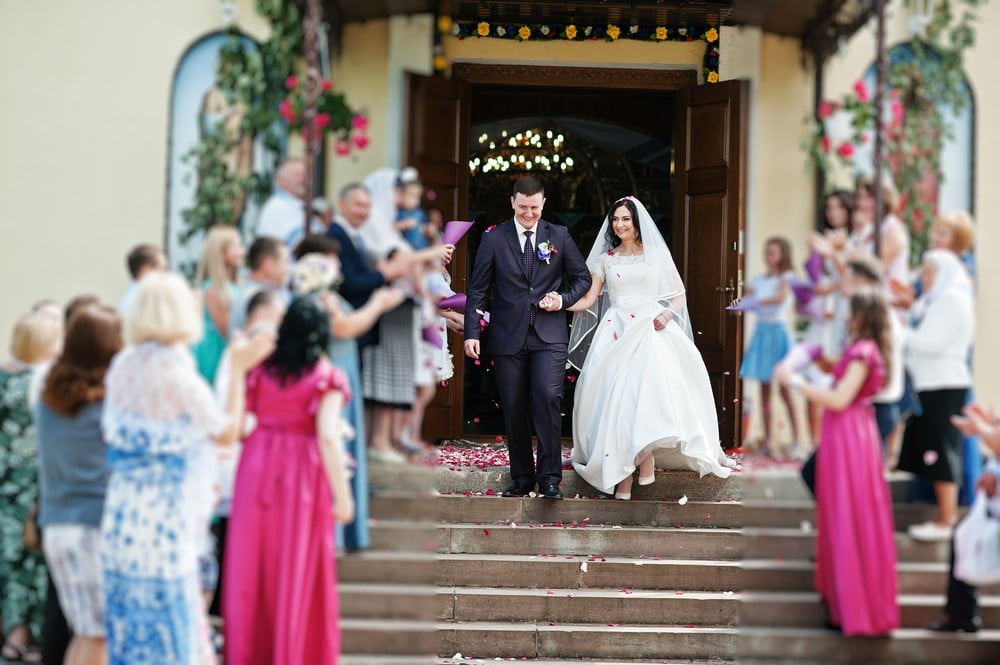 You may have noticed that in the Rite of Marriage, there was no mention of the priest saying, “You may kiss the bride.” The kiss is not part of the Rite of Marriage and is more of a secular tradition. The bride and groom still get their kiss, though.

After the final blessing, the Mass concludes. At this point, the priest says, “You may kiss the bride,” or some variation of it, and the bride and groom have their first kiss as a married couple.

The bride and groom lead the procession out of the church, followed by the wedding party in reverse order, the Best Man and Maid of Honor first, followed by the bridesmaids and the groomsmen.

Is there a dress code for a Catholic wedding?

As with any wedding, there is a dress code for a church wedding. Formalwear like dresses and suits are encouraged, but by no means necessary. If you aren’t part of the bridal party, you should be fine wearing a nice skirt and blouse or a shirt and tie with nice slacks.

Since a Catholic church is a place of worship and is considered sacred, make sure you dress modestly. This doesn’t mean you have to cover yourself from wrists to ankles, but you should probably refrain from wearing clothes with bare midriffs, plunging necklines, or short skirts.

Does a Catholic wedding have to be in a church?

Although it is fun and beautiful to get married at a mansion, an outdoor venue, or on a cruise ship, that isn’t an option if you want to get married in the Catholic Church. It may seem like a stuffy and limiting tradition, but there is a lot of spiritual meaning behind it.

Since a wedding is considered a Holy Sacrament for the bride and groom, the Catholic Church expects that a Catholic wedding should occur at the couple’s place of worship. Catholics believe that being in the church brings the couple closer to God and the blessings He wishes to bestow on their marriage.

Does a Catholic wedding have to include a full mass?

No, a Catholic couple can opt to have a Celebration of Marriage, which includes the Liturgy of the Word (readings and a homily from the priest) and the marriage vows. The wedding ceremony that includes a whole Mass is called a Nuptial Mass and includes the Communion Rite in addition to the rest of the ceremony.

How long does a Catholic ceremony last?

A Nuptial Mass will take about an hour since it includes mass and communion and the marriage vows.

From Pre Cana to the exchange of vows, a Catholic wedding is considered a Sacrament that the bride and groom receive in the presence of God and the Church.

People sometimes complain about Catholic weddings being too long, but there’s no better way to celebrate the beginning of their life together for a Catholic couple.