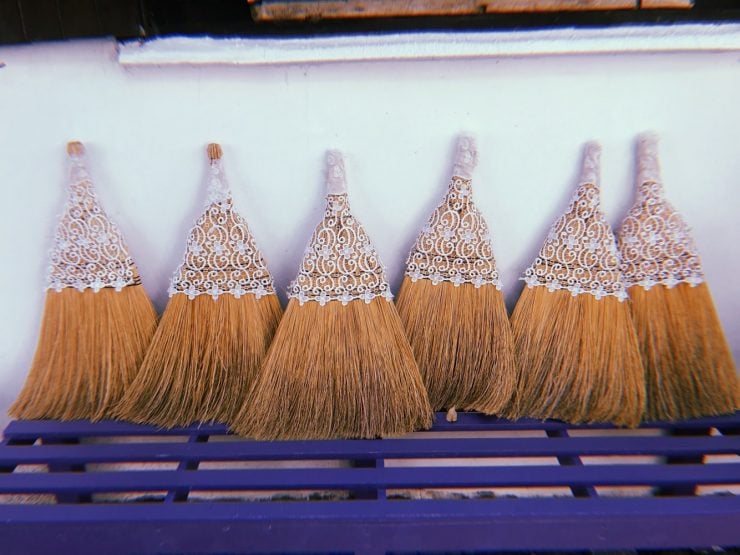 What Is Jumping The Broom? Everything You Should Know About This Wedding Tradition

When planning a wedding ceremony, most couples want their choices to accurately represent them. This means they take often this opportunity to include customs that reflect their heritage and personal beliefs.

Jumping the broom has become one of the most popular traditions for marginalized communities, especially if their parents have participated in this same practice for their own ceremonies. But, what is jumping the broom for those who don’t know the tradition?

If you’ve never heard of this idea or want to know more information before deciding to jump the broom on your special day, have no fear. We’re here to answer all of your questions about jumping the broom!

What Is Jumping The Broom?

Jumping the broom typically happens after brides and grooms have exchanged their vows, but before they walk back down the aisle.

The officiant reads a prayer, song, or other kind of sacred text as the couple holds hands and leaps over the long-handled brush. This time may be used as an explanation to the guests if they are unaware of this custom.

What Does Jumping The Broom Mean?

Jumping the broom carries a few meanings for ceremonies in the modern age. Husbands and wives tend to view this custom as a metaphor for sweeping away their past lives to start a new beginning. Other couples jump the broom as a symbol of heading into life together as one.

Who Lays Down the Broom?

Unlike most wedding practices, this tradition doesn’t dictate who exactly lays down the besom on the altar floor. Couples can use this chance to pick the Best Man, Maid of Honor, or another important person from their guest list to have this responsibility before they jump the broom.

What is the History of Jumping the Broom?

The oldest written records of jumping the broom originate from the customs of the Romani people who were living in Wales during the eighteenth century. These populations decided to jump the broom as a way of defying witchcraft because they associated the long-handled brush with evil.

Jumping the broom has recently gained popularity among Pagan ceremonies in the United Kingdom. These communities interpret the besom instead as representing masculine and feminine qualities.

In the United States, choosing to jump the broom is mostly associated with black communities. This tradition is believed to derive from spiritual ideas in modern-day Ghana where a broom was used to drive away evil apparitions from a marriage ceremony.

This long-handled brush continued to hold a cultural importance for the people transported over to the Americas through the transatlantic slave trade.

Since marriages between slaves weren’t legally recognized in the antebellum South, jumping the broom became a meaningful practice for couples who wanted to be together.

Historians have argued that this tradition was also encouraged by masters who wanted to make a mockery of their slaves. Others used this idea to portray a false sense of kindness against the protests of Northern abolitionists.

After the Civil War, husbands and wives decided to jump the broom to symbolize their union while waiting for an officiant to legally recognize their marriage.

The miniseries “Roots” revitalized the interest in jumping the broom for modern-day couples. Brides and grooms usually partake now to pay tribute to their ancestors by taking ownership of a practice that once oppressed them.

How Can I Decorate The Broom?

Before couples choose to jump the broom, they often decorate the besom to match their wedding theme. Beads, bows, flowers and other accessories are the most popular options. Couples in the LGBT community usually adorn their broom with rainbows.

For Christian ceremonies, many husbands and wives decorate their besom with ribbons so the handle can represent God while the straw symbolizes their shared families.

What Can I Do With The Broom After The Ceremony?

After jumping the broom, brides and grooms usually preserve the long-handled brush as a keepsake for their special day. The broom usually becomes a house decoration that is never actually used for cleaning.

Other couples may keep the besom as a family heirloom that will be passed down to their children if they decide to jump the broom for their own special day.

Understanding the history is essential for anybody who wishes to jump the broom during their wedding ceremony. Husbands and wives must treat this tradition with respect or consider skipping out on jumping the broom altogether if they want to avoid any possible cultural appropriation.

If you have decided to jump the broom on your special day, let us know who will be laying down the long-handled brush and how it will be decorated! We would love to hear about any of your other experiences with jumping the broom as well!

Micro Weddings: Everything You Need to Know

When to Book Your Wedding Venue