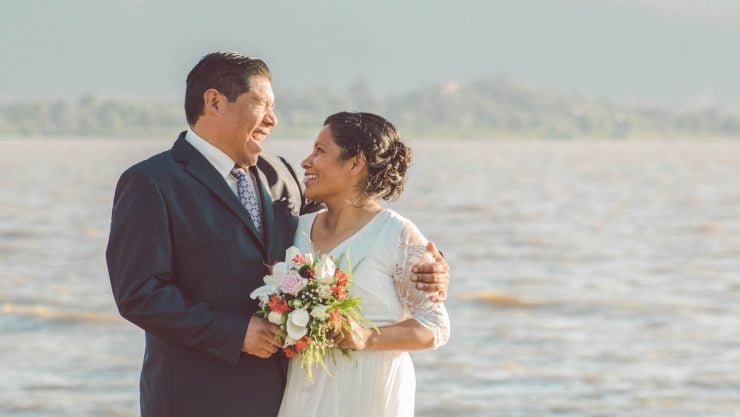 As a country with over 128 million people, Mexico has an endless amount of inspiration for your espousal!

If you and your future spouse are interested in hosting a traditional wedding ceremony and reception but aren’t familiar with Mexico’s cultural values, don’t sweat it!

We’ve come to the rescue with our guide consisting of Mexican wedding traditions!

What Are Mexican Wedding Customs?

As a former colony of Spain, Mexico shares many of its marriage customs with Latin American countries and the Philippines such as naming role model sponsors, planning a money dance and exchanging 13 wedding coins.

Learn all about Mexican wedding traditions today by reading our guide here at YeahWeddings!

Due to having a predominantly Catholic population, Mexico shares the same dress code for wedding attire as other Western countries.

In the central regions, many brides will choose a huipil as their Mexican style wedding dress.

The huipil is often compared to tunics, ranging in lengths and decorative details that are based on the formality of the event. This Mexican wedding dress is usually made out of cotton or wool.

If you prefer another option for your Mexican style wedding dress, find a flamenco gown! These outfits are known for their bold red colors and ruffles, but you can wear a white one in the same design!

For any grooms who want to skip out on wearing a tuxedo to avoid the heat on their wedding day, a guayabera is their answer. Made from silk and linen, this Mexican wedding shirt is characterized by its two vertical rows that are sewn along the front and back.

If you’re planning your special day with Mexican wedding ceremony traditions in mind, don’t think twice about including a lasso.

Predominantly found during Catholic ceremonies across Mexico, el lazo is a unity ritual that happens after the bride and groom have exchanged their vows.

When picking the lasso for your Mexican style wedding, just know that you can use anything from a silk cord to a double rosary. Some couples decorate the rope with a string of flowers from their bridal bouquet!

The wedding custom begins when los padrinos y madrinas, the couple’s sponsors, place the lasso around the shoulders of the bride and groom. This gesture symbolizes that the newlyweds are joining together as one. Mexican wedding traditions dictate the bride and groom wear the lasso until the end of the service.

Feel free to keep the cord, rosary, or rope as a romantic reminder of your Catholic wedding ceremony!

Present the Bridal Bouquet to Mary

For couples who are interested in incorporating Catholic Mexican wedding traditions as a reflection of their faith, consider spending a moment during your ceremony to present the bridal bouquet to the Virgin Mary.

This Catholic ceremony tradition originates from Europe during the seventeenth century and acts as a way to honor this holy figure during the next part of a couple’s life.

It’s perfectly acceptable for brides to prepare two bouquets so they’ll have one for their wedding photographs.

The wedding parade, translated from “la callejoneada” in Spanish, is usually planned after the end of the marriage ceremony.

With the bride and groom in front, wedding guests are encouraged to follow them while drinking, singing, and dancing to the reception venue. This common tradition involves donkeys and puppets that are made to resemble the couple called mojigangas.

Just be aware that this Mexican wedding tradition isn’t found throughout the entire country. La callejoneada is usually practiced in northern and central cities such as San Miguel.

The Sea Snake Dance, or “la vibora de la mar” in Spanish, is a fun activity for your entire wedding party!

According to Mexican wedding reception traditions, this performance begins with the newlyweds standing on chairs that are positioned opposite of each other. They form an arch while their guests pass through while holding hands and jiving.

Your wedding party will try not to break this “snake” formation as the music goes faster and their movements follow the change in speed!

Lift Up The Groom

If you prefer a simple idea for your Mexican wedding reception traditions, “el muertito” never fails with being fun!

To begin this wedding activity, the groom is lifted over the shoulders by all of the male guests and tossed several times in the air.

If his Mexican wedding party is feeling mischievous, they’ll take off his shoes and place tiny gifts or money in them.

If Mexican wedding reception traditions like  “la vibora de la mar” or “el muertito” do not sound perfect for your special day, don’t settle on either of those ideas! Consider “el baile del mandilon” instead!

The domesticated husband dance begins by dressing up the groom in an apron and asking him to carry a wooden spoon, sponge, or broom. A baby or toddler often participates as a representation of his own child.

The bride adorns a cowboy hat, drinks a beer or smokes a cigar, and pretends to whip her husband around with the belt during this special dance.

“El Baile del Mandilon” reverses the traditional gender stereotypes during a Mexican wedding and reminds the couple that they are now equals in their marriage. No matter what role each person plays in the marriage, the bride and groom have a say in their future together.

When it comes to Mexican wedding reception traditions, breaking open a pinata with your spouse proves to be fun and unforgettable.

As one of the newer wedding customs originating from Mexico, many couples are experimenting with this activity by filling these paper mache pieces with small favors for their guests like gift cards, jewelry and mini plastic liquor bottles!

This wedding reception tradition has even replaced the garter toss for many Mexican couples who swap out the prizes with these pieces of bridal lingerie!

The bouquet toss isn’t reserved only for American events!

Mexican traditional weddings refer to this custom as “lanzar el ramo.” The single female guests will dance around the bride and she’ll blindly throw her floral arrangement into the crowd while some exciting music plays in the background.

In the same way as American celebrations, Mexican wedding reception traditions say that whoever catches the bouquet will be the next person to get married. She’ll usually dance with the male guest who received the garter from the groom’s own toss.

If you’re searching for music that’ll feel right at home during your Mexican styled wedding, look no further than these unforgettable options!

It’s hard to imagine a better option than “Amorcito Corazon” for a bride and groom who prefer to hear a classic sound during their traditional Mexican wedding. The heartfelt ideas of Pedro Infante’s tune has pulled at people’s heartstrings since 1949!

Calibre 50’s “Contigo” has the sweet lyrics that you would expect to hear during a wedding inspired by Mexican culture. Choose this song for your first dance and you definitely won’t regret it!

Set the romantic tone of your Mexican wedding celebration by requesting Vicente Fernandez’s “Hermoso Carino.” This wholesome melody will definitely become a favorite among your guests!

Be sure to check out our suggestions for Spanish love songs as further inspiration for your wedding reception playlist!

A Mexican wedding isn’t complete without hiring mariachi players as the entertainment for your guest list!

Originating from the eighteenth century in the western regions of Mexico, this genre of music usually includes trumpets and string instruments like acoustic guitars and violins.

Don’t hesitate to ask the mariachi players to perform the hymns during your wedding mass!

Bring your Mexican wedding dreams to life by preparing food inspired by this North American culture!

If you’re looking for meal ideas for your Mexican styled wedding besides burritos and nachos, go with taquitos! These rolled tacos are especially delicious when prepared with refried beans, green chiles, scallions, and chicken!

When it comes to Mexican dishes, gorditas are hard to beat for a wedding menu. This cuisine is made with maize dough and stuffed with chile verde, eggs, or pork!

Another common dish served during Mexican traditional weddings is a soup called menudo made from beef tripe, red chili peppers, garlic, and corn. Limes and oregano are used as seasoning for the broth.

If you want to serve dessert during your traditional Mexican wedding, Tres Leches cake is never the wrong answer. Don’t be surprised if your guests ask for a second serving!

Known as “la tornaboda,” the after-party usually takes place immediately after the larger reception or the next day.

According to Mexican wedding reception traditions, this event becomes exclusive to family members and close friends of the married couple. Brides and grooms will normally use this time to open their gifts as well.

Mexican American wedding traditions are a fun addition to any kind of romantic celebration!

If you’ve been inspired by the Mexican wedding traditions that we’ve mentioned in our guide, let us know these customs will appear during your special day! Feel free to leave a comment about any other Mexican traditions that work for espousals!