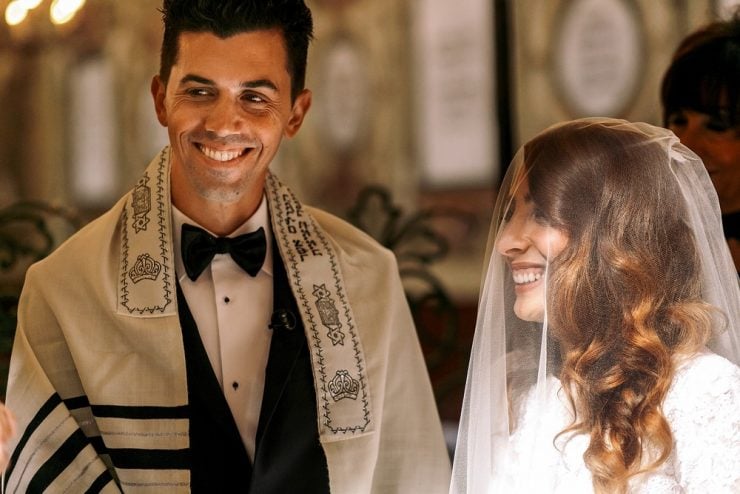 Traditions and Rituals You May See at a Jewish Wedding Ceremony

Weddings are not only a public declaration of love and devotion but a celebration of rituals, traditions, and customs with deep religious and historical roots. Judaism has thousands of specific rituals for every aspect of life, and weddings are no exception. There are various Jewish wedding traditions and practices.

Jewish wedding traditions may vary slightly between branches (such as Modern Orthodox versus Reform) and also depend on religious observations, but Jewish weddings display a unique set of rituals and traditions that honor religion, family, and history.

What Are Common Jewish Wedding Rituals and Traditions?

We will go over some of the most noteworthy Jewish wedding rituals and traditions that you can expect to see on the big day. If you’re attending a traditional Jewish wedding ceremony, these are some common practices. 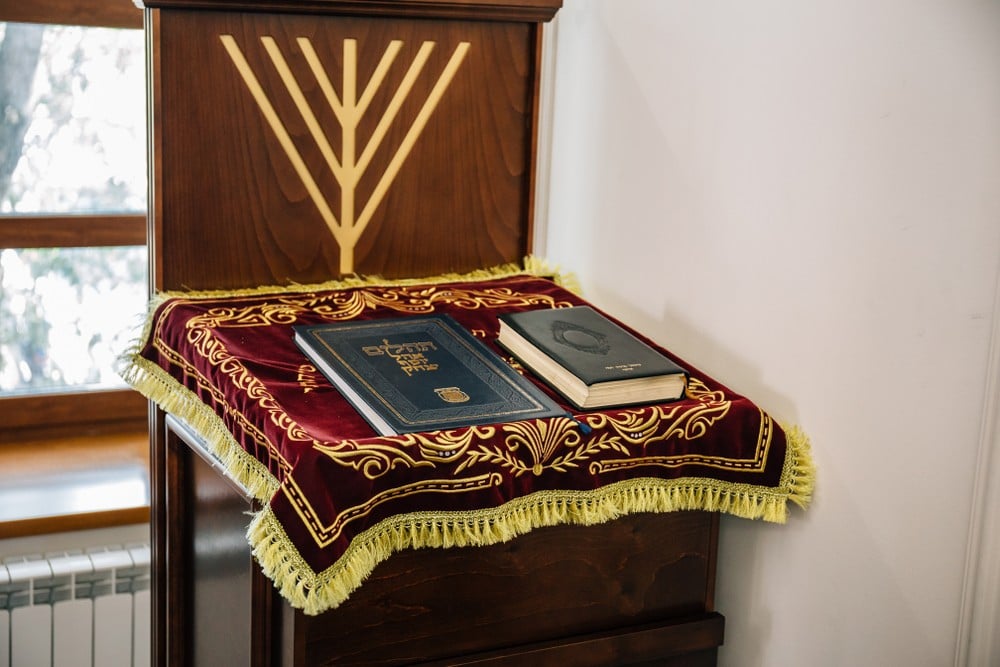 Aufruf is the Yiddish word for “calling up” and refers to the summoning of a groom, or the groom and bride, to join the rabbi on the pulpit or stage of the temple to recite a special prayer called the Aliyah, which is a blessing that introduces and concludes a Torah reading.

Following the couple’s recital of the Aliyah, the rabbi will recite a blessing for them in anticipation of the approaching wedding. This ritual takes place on the Shabbat before their wedding day.

In Sephardic and Mizrachi traditions, this ritual is referred to as Shabbat Hatan.

Fasting in the Jewish faith is a ritual that takes place to ask for forgiveness for any sins or wrongdoings to wipe a person’s slate clean, so to speak. There is a special day of atonement known as Yom Kippur where Jewish people fast the entire day.

A Jewish couple sometimes fasts on the day of their wedding to go into the ceremony with a clean conscience and moral compass.

Typically, only Ashkenazi Jewish traditions require fasting. Sephardim typically do not fast for the wedding, as this is a day of celebration rather than solely a rite of passage.

Bedeken is another Ashkenazi ritual and originated from the book of Genesis, more specifically from the story of Jacob and Leah. The story recounts that Jacob married Leah by mistake because he did not see her face before they married and mistook her for her sister, Rebecca, who he was intended to marry.

Therefore, Bedeken is a ritual in which the bride and groom get to see each other for the first time before they marry. The Hasidic tradition separates men and women in most aspects of daily and religious life, so it is customary that couples do not see each other or court before they marry. For less conservative movements, this ritual is more performative, harkening back to the past.

The bride waits in a room surrounded by the women in her family while the groom is escorted into the room by the men in his family and the congregation. The groom then places a veil over the bride’s face after seeing her, protecting her from the evil eye. 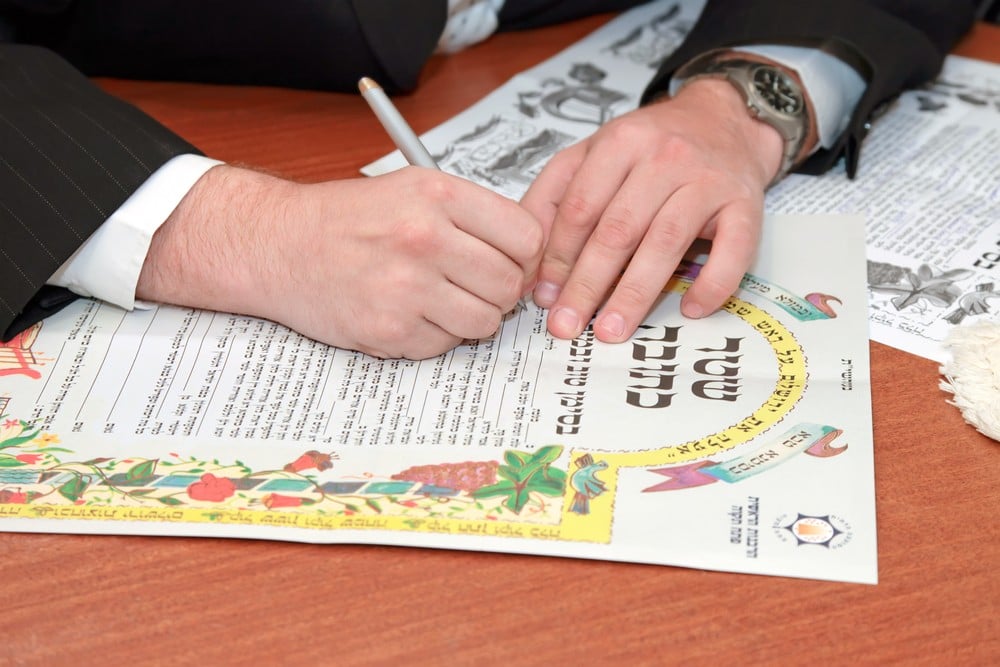 The Ketubah is a written Jewish marriage contract that the couple signs together with the rabbi and two other witnesses. In more conservative movements, the Ketubah is only signed by the groom, rabbi, and male witnesses.

Walks down the aisle at Jewish weddings have a certain order that differentiates them from some other wedding traditions. According to Jewish tradition, the order is as follows. 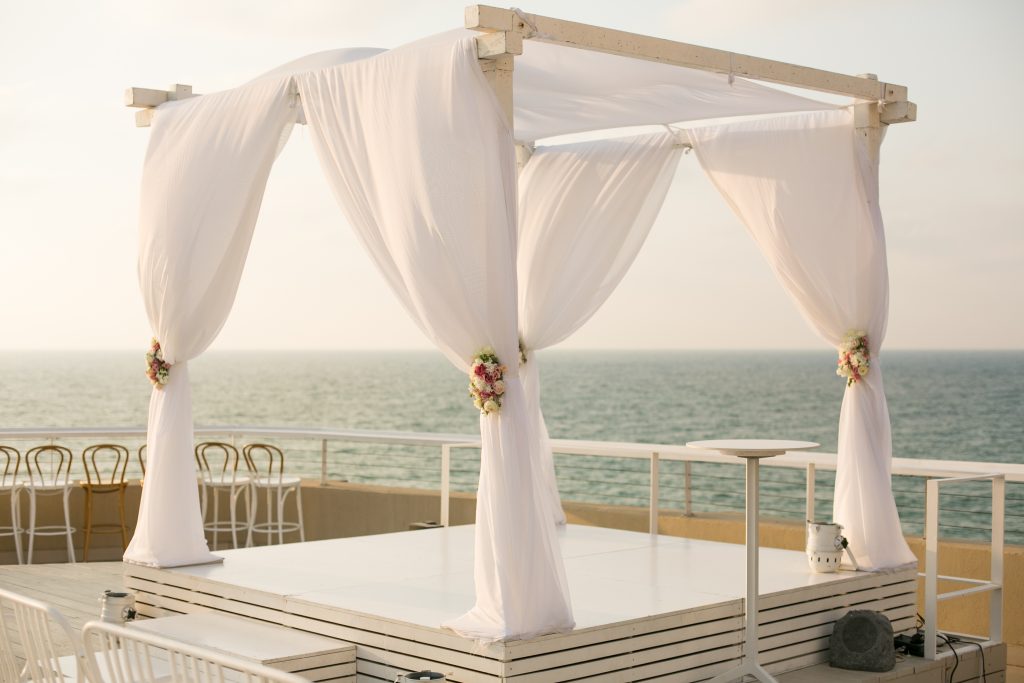 The Chuppah is a cloth wedding canopy with four posts held by four close friends or family members in Ashkenazi traditions. The couple is married underneath the Chuppah.

The Chuppah is a historical symbol that references ancient Jewish wedding ceremonies where weddings took place outside, and the Chuppah connoted the intimacy of marriage.

Friends and family holding the Chuppah up also represent familial and communal support and solidarity for the new couple in their marriage.

Historically, Sephardim stand together under the groom’s prayer shawl, called a tallit.

A post shared by Your Jewish Wedding Your Way (@smashingtheglass)

Many modern couples get creative with their chuppah’s design and style, using

Also called Hakafot, this Ashkenazi tradition takes place during the procession as the bride will circle the groom either three or seven times before they both take their place under the Chuppah.

For some, this represents protection against the evil eye, similar to the Bedeken. You may also see the bride circling the groom three times, then the groom circling the bride three, and finally both circling each other simultaneously once. 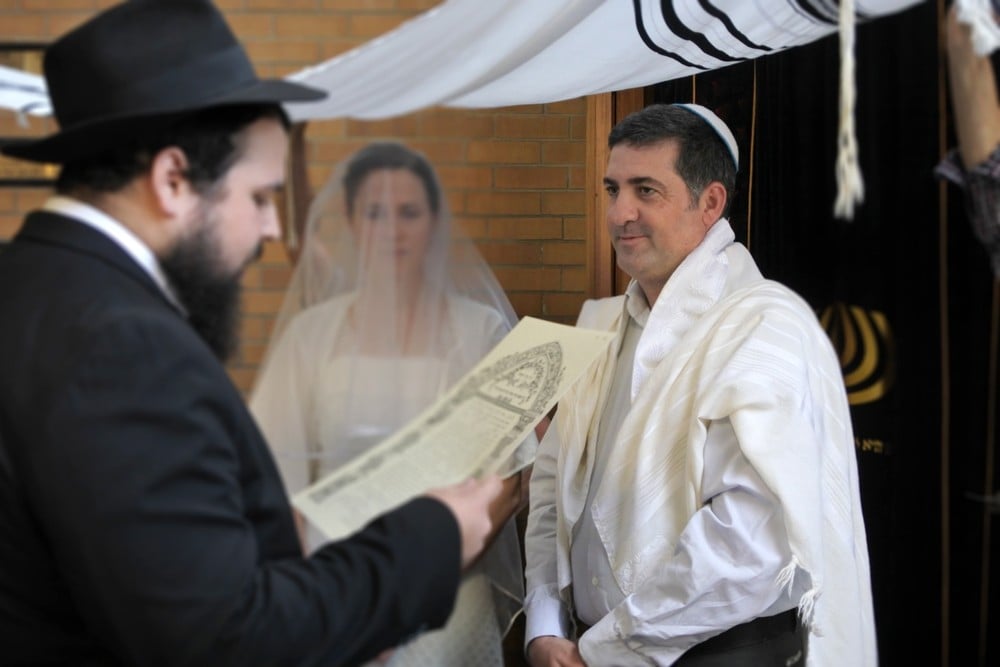 Meaning seven blessings, the Sheva B’rachot consists of different prayers for the wellbeing of the couple, continued peace in the holy land of Jerusalem, the exaltation of a single G-d, among other blessings.

The rabbi can recite all the blessings or assign friends and family to each recite a blessing as a way to include and honor the couple’s loved ones. The couple’s parents can wrap them in a prayer shawl during the recitation of the Sheva B’rachot to signify unity.

Breaking of the Glass 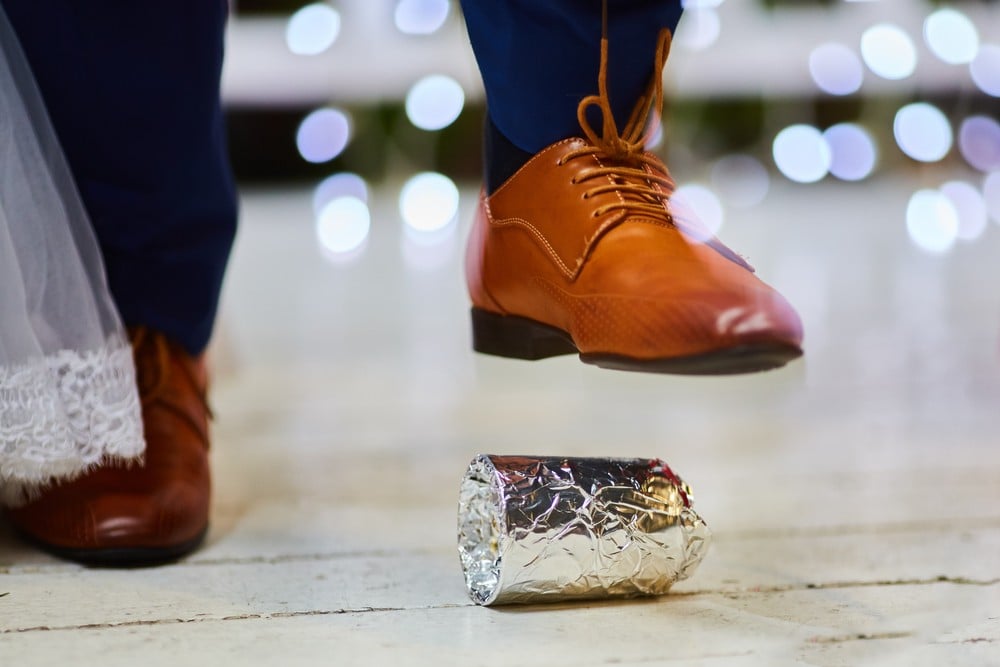 Perhaps one of the most widely known Jewish wedding traditions is the breaking of the glass. Right before the marriage is consummated with a kiss, the groom breaks a glass enveloped in a cloth with his right foot.

This prompts the wedding guests to shout “Mazal Tov” (Hebrew for “Good fortune”) while the couple kisses for the first time as husband and wife.

The breaking of the glass has historical and social symbolism as some say that it symbolizes the destruction of the Temple of Jerusalem, while others say it alludes to the vulnerable nature of social and romantic relationships.

The Yichud is another Ashkenazi ritual that was originally intended for the couple to consummate the marriage after the ceremony. Today, the couple gets 15 minutes to themselves in a private room to enjoy the pleasure of each other’s company alone amid all the communal wedding celebrations.

Couples can feed each other food, have an intimate conversation, embrace, or simply gaze into each other’s eyes.

Traditionally, Sephardim believe that this tradition compromises the modesty of a couple.

The S’eudah Mitzvah, or Seudat Mitzvah, is the traditional Jewish wedding feast that usually features either chicken or fish and is preceded by sutlach, which is a rice pudding made with coconut milk, almonds, and honey.

The Hora is a traditional wedding reception dance in which all wedding guests participate. Guests dance in a circle around the newlyweds to the tune of “Hava Nagila.” The newlyweds are then hoisted up into the air on chairs by the wedding party and bounced up and down in celebration.

If this is your first time attending a Jewish wedding, you can expect to see at least some of the above-listed Jewish wedding traditions. They are wonderful and culturally rich rituals that honor the values and tenets of Judaism.