Tasked with planning the best bachelor party ever but unsure of what games to play? Look no further! Here is a comprehensive list of the 13 most entertaining bachelor party games that are guaranteed to please.

Bachelor parties are bound to have games and booze so why not combine the two and kill two birds with one stone? Playing and drinking means a great time for all! 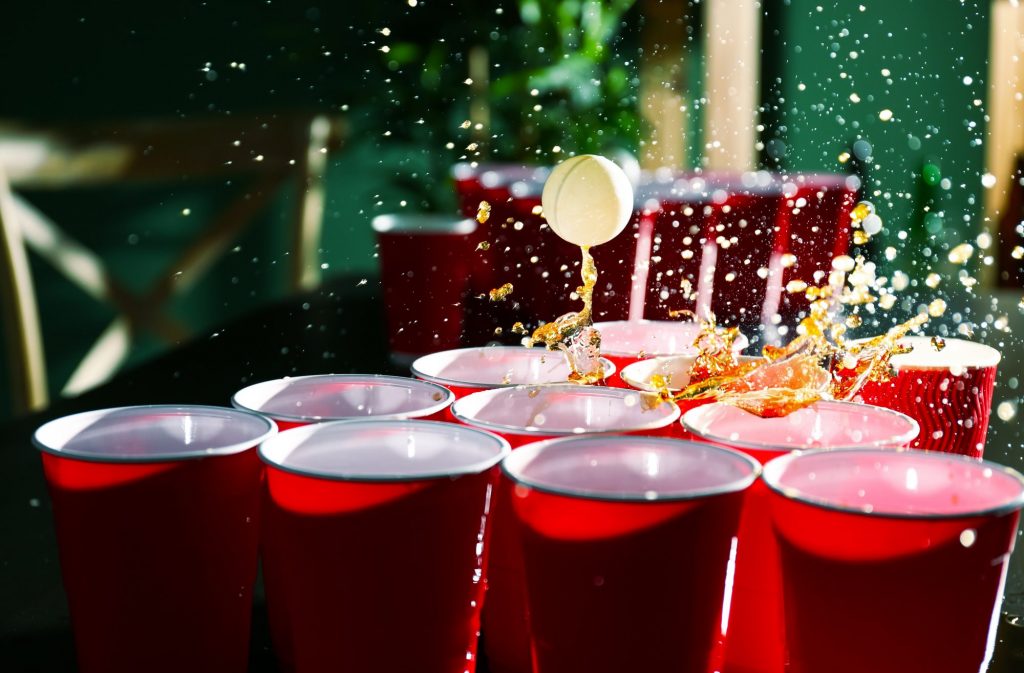 Beer pong is a fun, well known game that is sure to get you at least a little tipsy.

Arrange ten plastic cups in a triangle shape at each end of a table. Add a few sips of your alcoholic beverage of choice (usually beer, hence the name).

Split into two teams and each member should take a turn throwing a ping pong ball into one of the cups at the opposite end of the table.

If you get a ball in a cup, a member of the other team has to drink that drink. The first team to eliminate every cup at the other end of the table wins.

Shot roulette is great for pregaming before heading out to a bar or club. The rules of this game vary from version to version, but the most common version has a roulette wheel and various shots that correspond to every space on the wheel.

Players take turns spinning the wheel and drinking the shot they land on.

Drunk Jenga is a fun twist on a popular game! It is played almost exactly the same as normal Jenga, but instead of having blank blocks, you write various rules and challenges on the blocks.

You take turns pulling blocks and whatever your block says, that is what you have to do. It can be anything from taking a shot to shotgunning an entire beer. The challenges are multitudinous and can range in difficulty!

Whoever knocks over the tower will be asked to do a special challenge and more difficult challenge. The world is your oyster with this game!

Flip cup is a great choice to start off any evening.

Split your group into two teams and line up on either side of a table. Have your drink of choice in a plastic cup in front of you. Once the game starts, the first person on the team has to drink their entire drink and then flip their cup.

If your bachelor is the outdoorsy type, consider playing some classic backyard games. They are easy to learn and fun for everyone, whether they’re playing or just watching! 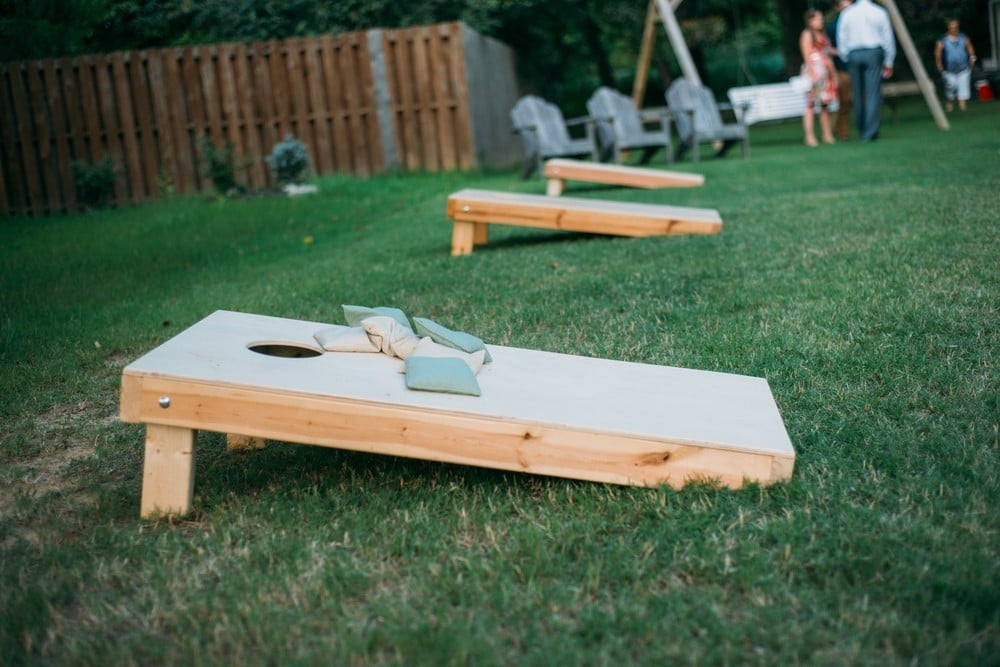 Cornhole is a classic backyard game that everybody will love.

You need two cornhole boards, which you can either purchase online or DIY yourself. You will also need eight bean bags in two different colors so there are four of each color.

From there, players will take turns pitching bean bags at the boards in an attempt to make it onto the board or into the hole. For more in depth directions, look here.

To play dizzy bat, all you need is a plastic wiffle ball bat, a wiffle ball, and your alcoholic drink of choice.

Cut the end off of your bat and fill it with your alcoholic beverage. Drink the bat full of alcohol. Be sure to time how long it takes for them to drink everything in the bat.

After that, the person drinking has to put the bottom of the bat to their head, bend over at the waist, and spin around for as many seconds as it took for them to finish their drink.

From there, someone will pitch them the wiffle ball or a crushed drink can if you prefer. If the drinker hits it, their turn is over and somebody else goes next. If they miss, the drinker has to go again.

Love frisbee and drinking? This is the perfect game for you.

Gather your group and split up into two teams. You will need a flying disc, two poles, and beer cans. Teams take turns attempting to knock a beer can off the opposing team’s pole using the flying disc. The other team has to catch the frisbee and the beer can, assuming that it is falling.

Bonding and Conversation Based Games 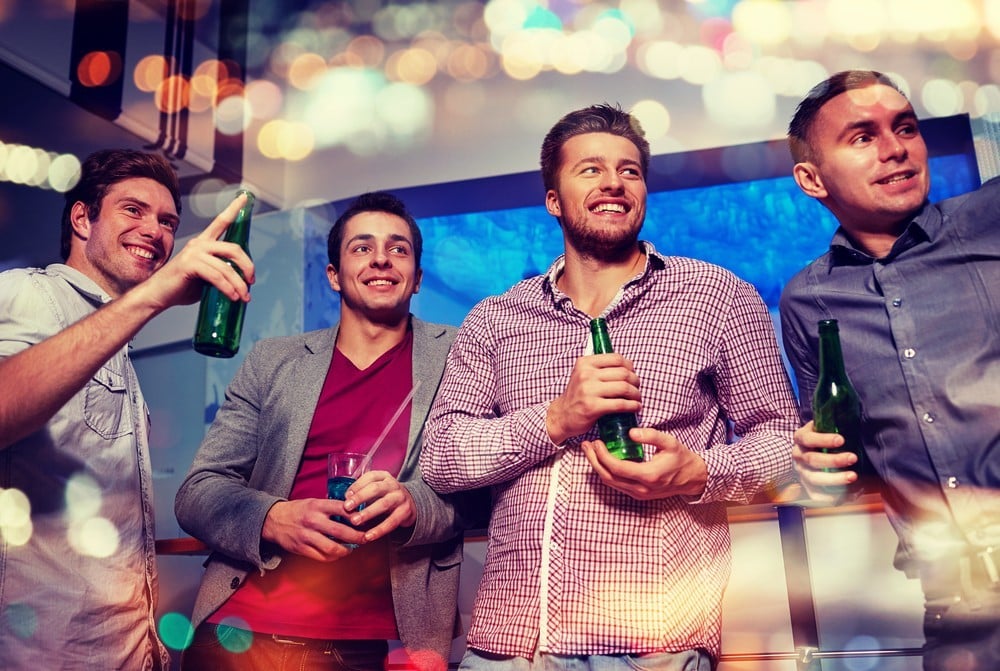 If you’re looking for a game that’ll bring you back to your childhood, these bonding and conversation based games are perfect for your bachelor party. From Truth or Dare to Never Have I Ever, you’ll get to know your friends better than you ever thought possible.

After someone asks their question, the group counts to three and then every person points at who they think is most likely to do what was said. There are tons of lists of questions online.

These questions can be anything you want! The funnier, the better.

Truth or Dare was the best game at middle school parties. Why not relive those memories by playing it again as an adult?

If you’ve never played, here’s the basic rules: in the game, your crew takes turns asking one person if they want truth or dare.

Make your choice carefully because you can’t change once the challenge has been given!

Never Have I Ever

Never Have I Ever is sure to get you to reveal your deepest and darkest secrets. Guests take turns saying things they have never done from cheating on a test to stealing from a store. If you have done the thing that is said, you have to put a finger down.

Once all of your fingers are down, you are out of the game. Last person with fingers up is the winner.

To up the stakes, players can take a drink or shot every time they have done whatever is said. Be ready for hilarious embarrassing stories that have never before been shared.

Two Truths and a Lie

How well do you know your closest friends? Two Truths and a Lie will surely put your knowledge to the test.

Each person takes a turn telling the group two truths and one lie about themselves. Everybody has to guess which of the three bits of information is the lie based on what they know about the person.

Bonus Games for Your Bachelor Party 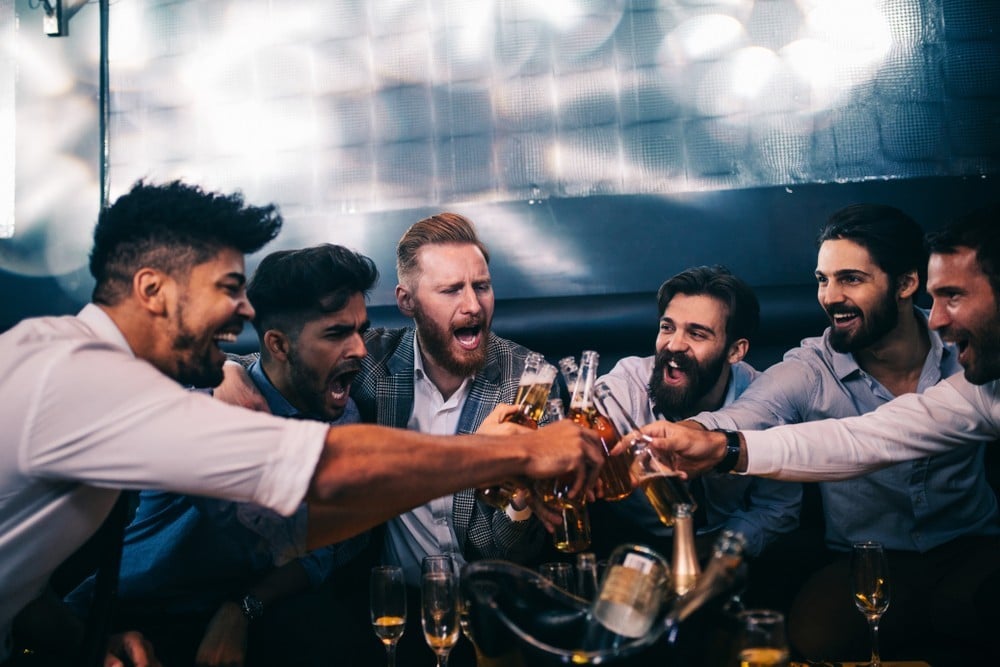 Below are a few more games that are bound to make the night a total hit!

Party rules are a great way to make a game out of the entire evening. Come up with a list of rules that everyone must follow during the party. Some rules include not being able to say a certain word or not being able to use your cell phone.

If somebody breaks a rule, they’ll be punished. The punishment can be to take a shot, do something embarrassing, or something else completely. The possibilities are endless!

Whether you play it at the club or before you leave, a scavenger hunt is the perfect game to get everybody involved.

Create a list of challenges each person or team has to complete before the end of the night. Challenges can be things like take a body shot or get a girl’s phone number.

The person or team with the most things completed wins! 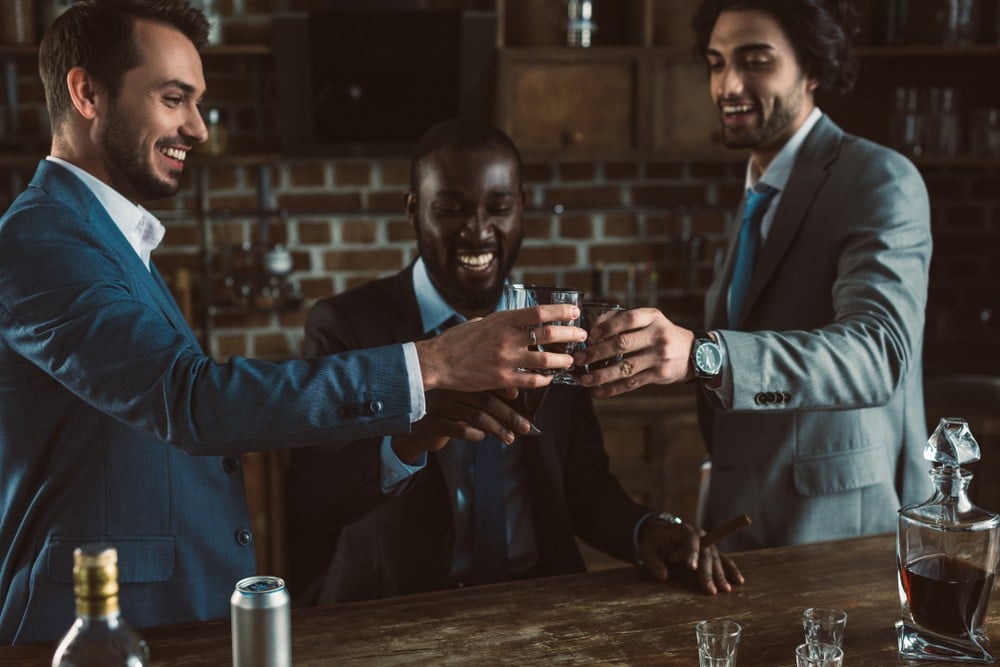 Bachelor parties are about having fun and letting loose for one night. Wherever you travel for your bachelor party, all of these games are the perfect way to make your night entertaining and unforgettable (that is if you don’t black out!).

If you’re the best man, use these bachelor party games to get the party started for the groom!

Will You Be My Best Man? How To Ask