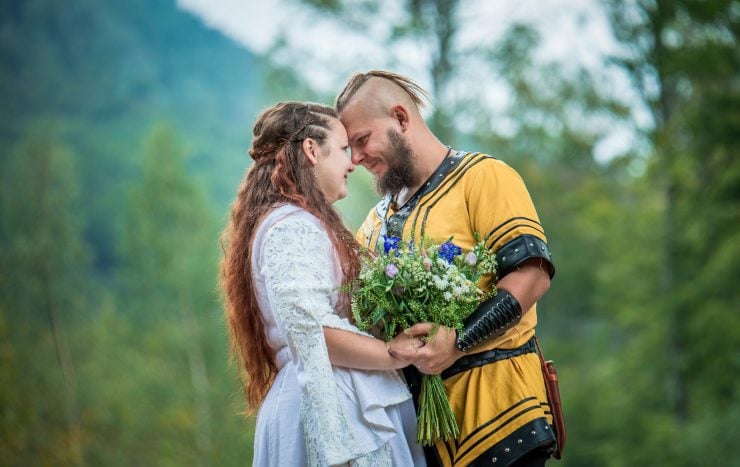 Newly engaged and planning a wedding? Don’t know what kind of theme you want for your wedding? If yes, we would like to introduce you to Viking-themed weddings. If you’re fascinated by Viking culture or want to learn more about Nordic weddings, you’ll want to stick around for the following Viking wedding traditions.

According to Alehorn.com, marriage was an important feature of Viking culture. Viking weddings, also known as Norse weddings, united not only the bride and groom, but it allied both of their families.

Wedding celebrations usually lasted a week and were usually held in the summer to avoid the snowy winters that made it impossible to travel to the wedding location. The families arranged the marriages, and the bride and groom didn’t speak much to each other before the wedding.

Although Vikings married for economic and political reasons, marriage opened the possibility of having true-born children. Being able to have children was crucial during Viking times because the more children they had, the more they could farm and the more wealth they could acquire.

Viking Weddings took years of planning. Not only did they have to provide enough food and shelter for their guests, but they also had to make sure that the ceremony took place at a very specific time. More about this below!

What Are Viking Wedding Traditions?

Viking weddings always took place on a Friday also known as Frigga’s day, a day sacred to Frigg, the goddess of marriage, love, and fertility. She was also the wife of Odin, one of the principal Norse gods often associated with wisdom, healing, magic, war, death, poetry, etc.

As you can see, Frigg and Odin were important gods in Norse mythology, and they all had their days of the week. Hence the Vikings set their wedding day on Fridays to honor the goddess of marriage.

If you’re going to have a Nordic wedding, set the date of your nuptials on a Friday.

According to ingebretsens-blog.com, brides were attended by other married female relatives and friends, including their mothers and their married sisters, to prepare them for marriage. The bride would cleanse herself in a bathhouse to symbolically wash away her maiden status.

There is no doubt that they valued cleanliness. Scandinavian women wore a kransen, a circlet on their hair which symbolized their virginity. During the wedding ceremony, they replaced the kransen with a bridal crown and stored the circlet for the bride’s future daughter.

The groom’s attendants had placed the sword in the grave. This ritual symbolizes the groom’s death as a boy and his emergence as a man. Just like the bride, the groom would cleanse himself in a bathhouse to symbolically wash away his bachelor status.

As you can see, the bride’s and the groom’s families were very involved in the wedding preparations.

Bride and groom must exchange swords

Apart from exchanging rings, the bride and groom must also exchange swords. Now, I know what you are thinking: what kind of wedding involves weapons and how are they used in the wedding ceremony? Typically, when people think of a wedding they imagine wedding rings, not swords.

To the Vikings, however, the exchanging of swords at weddings symbolized the transfer of protection between the groom’s and the bride’s family. They would each exchange ancient swords from their own family. Furthermore, it united the two families that were now responsible for supporting and protecting one another. They stored the swords for their future swords.

The wedding rings, on the hand, were placed on the hilt of each sword. Although not as important as the sword ceremony, exchanging the rings symbolized the union between the couple just like today.

The Vikings would hold massive feasts and it was an important part of the wedding celebrations. They always held the feast after the wedding ceremony, and the families usually chose the food.

We don’t know much about what foods exactly they would eat at the massive feast. What we do know is that there their biggest feasts usually included fish and meats as well as other tasty foods.

A Lot of Mead (Booze) is a Must-Have

Apart from a lot of delicious foods, the bride and groom would consume a lot of booze after they tied the knot. To further symbolize their marriage, they would drink from a cup known as a loving cup. They were required to get drunk and this custom is also known as bridal ale.

Furthermore, their guests also got drunk during the mead. As you can see, none of them had an option- it was mandatory to get drunk to celebrate the couple’s marriage. What an interesting tradition, huh?

The Wedding Should Involve Norse gods

Since Norse gods were important to the Vikings, it makes sense that they would do anything to honor the gods and obtain their blessing.

As stated before, Viking weddings would take place on Fridays to honor the goddess of marriage, but Frig wasn’t the only god who played an important role in their wedding ceremonies. Surely you have heard of Thor, the god of thunder and son of Odin. Most importantly, he is known for his hammer also known as Mjollnir in Norse mythology.

Have you ever heard of a handfasting ceremony? Handfasting ceremonies were typical events during pagan weddings. This practiced most likely came from the ancient Celts, but the Vikings used it as well. The couple’s hands are tied together with some cords or cloths while the officiant binds them and officiates their marriage. They are literally tying the knot.

Moreover, this practice was important to the Vikings as it indicated that the couple was getting married by choice, not by force. Believe it or not, handfasting is still a popular practice in many European cultures today.

Today, some couples use scarves that they knitted together to bind their hands on their wedding day. Some even use handkerchiefs that used to belong to deceased loved ones to join their hands together during the ceremony.

Strangely enough, Vikings made animal sacrifices to receive blessings from their gods of fertility. After the end of the premarital rituals, it was time for the wedding ceremony to begin.

At the ceremony, the bride’s family paid a dowry to the groom’s family. Then they began a religious ceremony where they would summon the gods and goddesses. This ritual may have include animal sacrifices and incantation.

They poured the animal’s blood into a bowl and placed it on an altar. Next, they would take some fir twigs and dip them into the bowl with animal blood to sprinkle it on the couple and obtain their gods’ blessing.

Bride running, also known as the bruðhlaup, is a ritual that involved foot racing. Once the ceremony ended, the bride and groom’s families would race to the mead hall. The family that lost would have to serve drinks to the family who got there first for the rest of the wedding celebration.

This might be a fun game to try at your wedding. But you might want to change it up a bit since your guests probably won’t want to race all the way to your wedding reception, especially if they’re wearing high heels and long dresses.

Bridal wedding hair was crucial to the Vikings as it symbolized the bride’s sexuality. It was even more important than the wedding dress. As stated before, the bride wore a bridal crown which she inherited from her mother. They adorned the crown with many ornaments.

They decorated the wedding bridal crown with flowers, straw, wood, crystals, or any other important materials that were available. The longer the hair and the more ornaments it had, the better off were the couple.

The grooms wore ornate garments and would carry a symbol of Thor. Symbols of Thor include axes and hammers. These were good omens for a strong marriage.

Curiously enough, the Vikings didn’t care about the wedding clothing as much as they cared for the hair. Brides probably wore bright, red dresses as it was a popular color during that time. Other colors that were popular during that time period included blue, green, and yellow. Hence, Viking weddings were colorful events.

Have you ever wondered where the word honeymoon came from? Well, it comes from the Scandinavian practice of drinking honey mead.

After the wedding celebrations were over, six people would accompany the lovers to their bridal bed to let the couple consummate their marriage. The couple’s friends and family would give them enough honey mead that would last them a month (moon cycle). The first month of marriage was to increase the chance of conceiving a child.

How to Have a Viking Themed Wedding

Now that you know some of the most fascinating Viking wedding traditions, you can use them as inspiration to recreate your own Viking-style wedding. Here are some ideas on what to include at your Nordic-inspired wedding.

Dress up and have your guests dress up too! You can wear flowing dresses with ruffles, leather tunics, faux fur cloaks, Viking headdresses, flower crowns, capes, boots, or even shields and helmets if you want to.

Vikings would travel to distant lands by boats as they were experts at building them. For your wedding, you can have your wedding ceremony or party on a Viking-style boat. Consider decorating it with Viking decorations such as long wooden tables, carved horns, candles, fake animal skins, flowers, etc. Or make your big entrance to the altar on a boat.

The Vikings were also very close to nature, so it might be a good idea to have a woodland wedding. You can set up wine barrel tables, a wood wedding arch, wooden runes, Viking wedding bouquets, candlesticks, bonfires, drinking horns, runes, etc.

As for the food, you can include fish, meats, vegetables, nuts, stew, wheat, eggs, grains, and berries as their diets consisted of these foods. It is also a good idea to have a Viking-themed cake, and don’t forget to serve honey mead like the Vikings. They used to make honey mead by fermenting water and honey.

Fun Viking wedding games include outdoor activities such as archery, bride running, axe throwing competition, and mock sword fights and battles. You could also hire an artist to do rune tattoos at your wedding.

You don’t actually have to sacrifice animals, but you can offer other objects such as candles, flowers, coasters, drinking horns, and Viking bracelets and necklaces.

As you can see, Viking wedding traditions were fascinating and they had so many rituals. There is no doubt that Viking wedding ceremonies were valuable in Viking culture.

Let us know what ideas you’ll use at your Nordic-themed wedding. Good luck with your wedding planning!