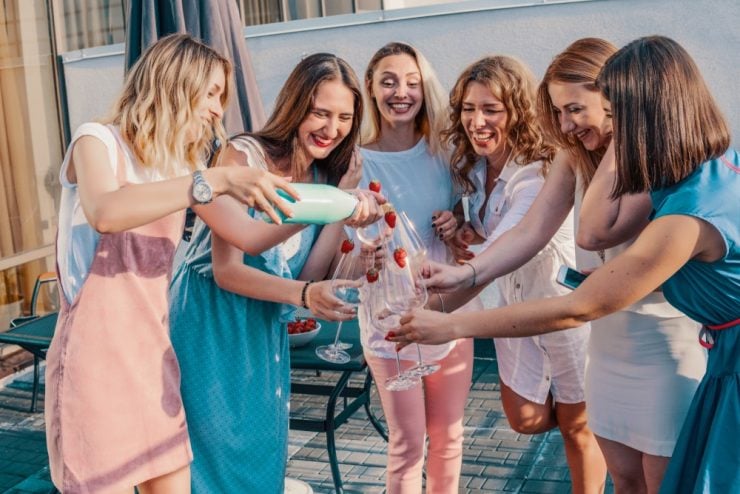 Who Hosts and Pays for the Bridal Shower?

Did you know that according to the Old Farmer’s Almanac, the bridal shower’s origin goes back to the 1890s where the first bridal shower hostess offered presents for the bride? The concept caught on, and in a similar fashion, women began to shower brides-to-be with bridal shower gifts.

Fast forward to today, a bridal shower is a women-only event where ladies give gifts to the soon-to-be bride to celebrate the upcoming wedding and help set up their new home.

Who Throws The Bridal Shower? 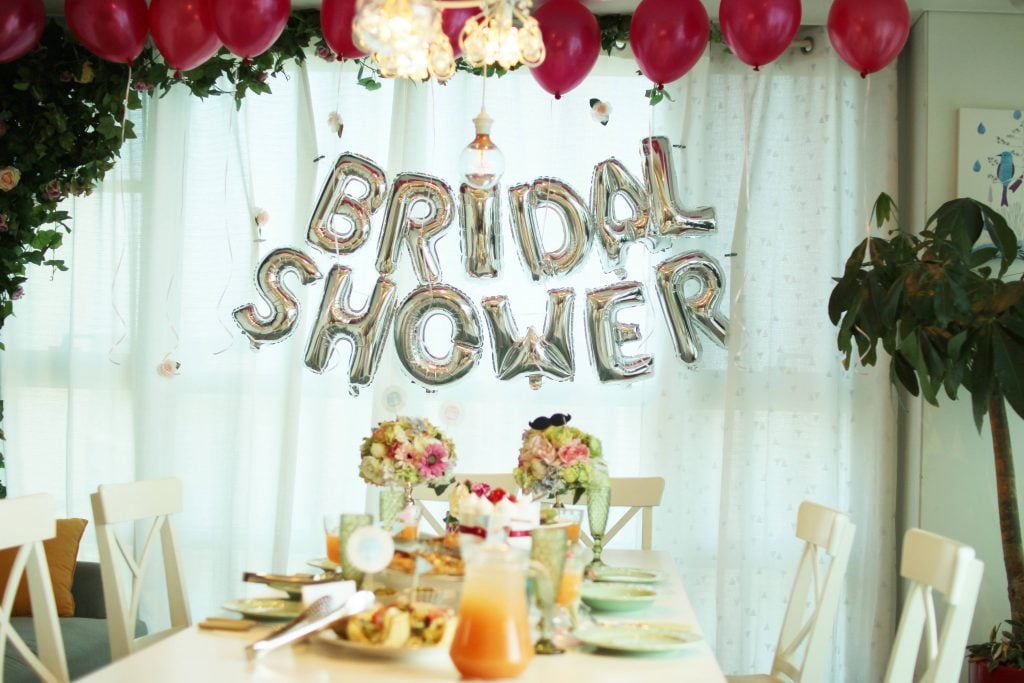 The bridal shower custom evolved from a dated dowry system where the bride’s parents presented some valuables to the marriage in compensation for the heavy responsibility the groom takes on – supporting the wife.

However, if the bride’s parents couldn’t afford a sufficient dowry, family members and others would chip in by offering gifts to offset the financial burden.

These items offered helped the young couple set up their new household.

Traditionally, the bride’s immediate family would never host the bridal shower. Instead, her aunts, cousins, and bridesmaids shouldered the responsibility of hosting it. But today, the bridal shower has evolved, leaning away from tradition and towards versatility so that no stringent rules apply.

So who plans the bridal shower? Who pays?

Today it’s the maid of honor and bridal party or the bride or groom’s mother who throws the bridal shower. Typically, whoever throws the event is the one must cover the costs.

There really are no strict rules, and anyone can contribute or pay for the bridal shower – close family members, bridesmaids, or even the couple themselves if they insist on covering the expenses. Traditionally, however, the bride and groom should not pay or worry about who hosts, as they are focused on wedding planning.

Something important to remember is that if multiple people are planning the bridal shower, then the maid or matron of honor should coordinate while ensuring everybody is involved so that nobody feels excluded.

If I Host the Bridal Shower, Do I Have To Pay For It? 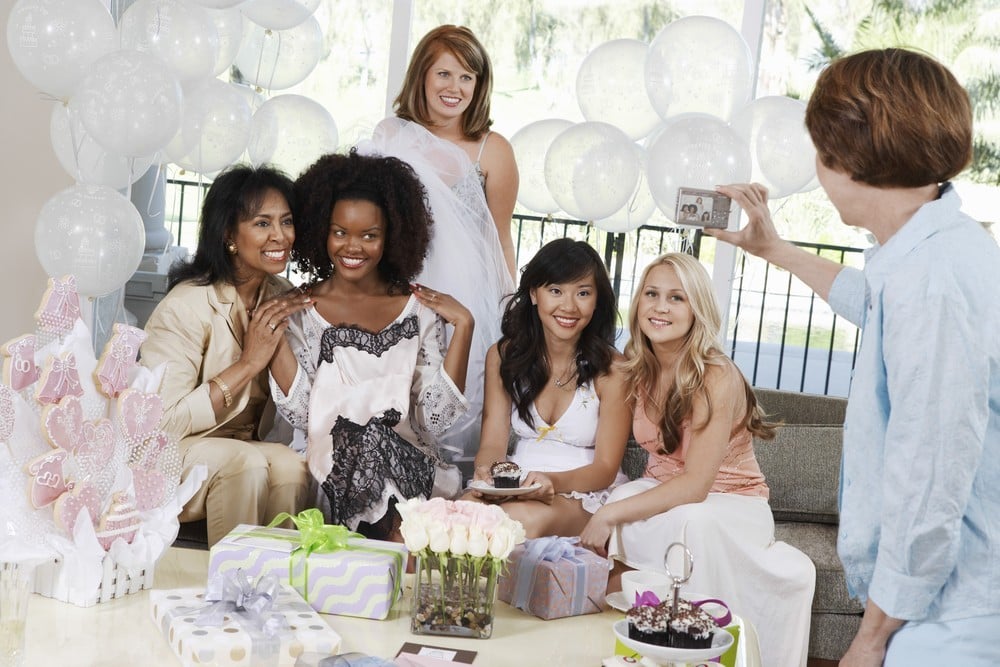 If you offer the host the shower, it’s often expected that the host pays for the bridal shower costs. But what if you want to offer your home as the venue without paying for the full cost of the event?

As we stated above, there are no true rules anymore about who hosts the shower, who pays, and other traditional etiquette. If you are a bridesmaid, the maid of honor, or just a good friend, you can offer to host without paying for all the expenses.

Just make it clear to whoever is helping you plan the event that you still need help covering related costs like food, vendors if necessary, shower decorations, invitations, and so on. Everyone can still chip in so that the person hosting at their home does not have to budget for everything and pay for a gift.

What If I Can’t Afford It?

It’s common for bridesmaids to split the price and host the bridal shower themselves. Being a bridesmaid is usually expensive, however – you also need to budget for the bachelorette night, bridesmaids dresses, hair and makeup for the big day, a bridal shower gift and wedding gift, and more.

Discuss expenses and your budgetary limits with your fellow bridesmaids or the bride herself – they will understand!

You could also ask the person hosting if you could contribute some other way. Consider ideas like food (you could cook or bring desserts), helping with DIY invitations, or other nice ideas to help out without breaking the bank.

Is the Bridal Shower a Surprise? 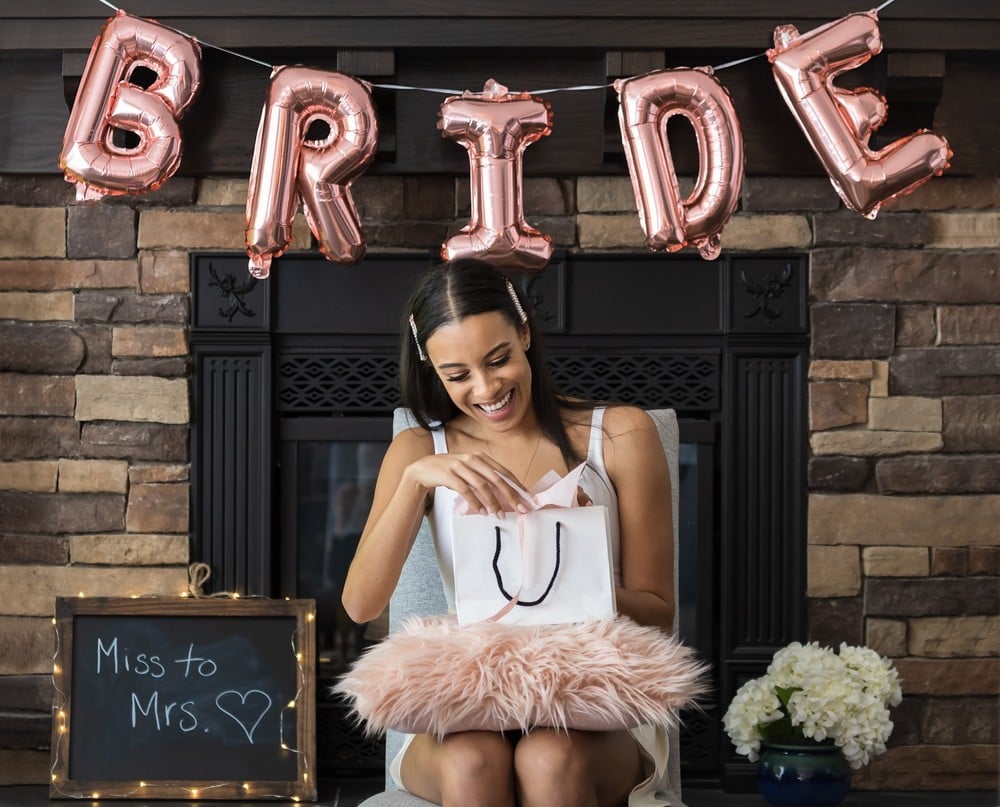 Although It’s common for the bride to be unaware of the theme, the bridal shower is rarely a surprise.

That’s because it’s an event planned for her; therefore, her opinion and preferences count a lot. It’s important to ask what the guest of honor wants for events like the bridal shower and the bachelorette party.

If you think she might want to be surprised, have someone like the maid of honor or another bridesmaid ask her!

It’s supposed to be a happy time for the bride-to-be, and what she wants for the event should be the priority. For example, does she prefer a high tea or cocktail-style soiree or something less traditional like a cozy home shower? Try to be sure that you host a shower that your friend will love.

How Much Does a Bridal Shower Cost? 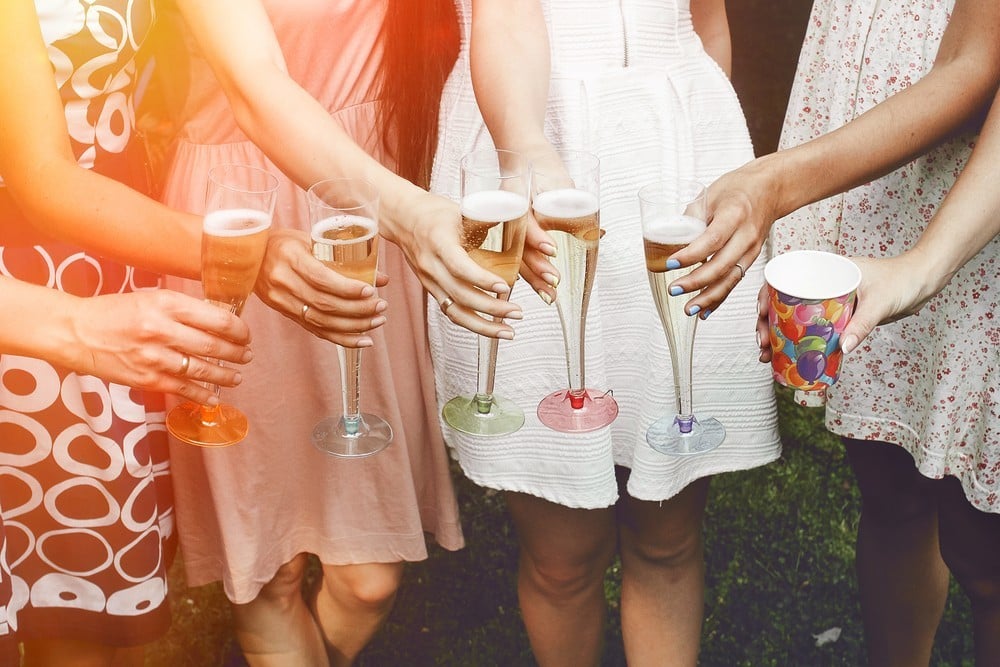 If we’re covering who pays for showers, it’s helpful to know how much the event will ultimately cost. If you’re a bridesmaid or a host trying to get a handle on budgeting, it’s good to know how much you may have to throw in if everyone splits the expenses.

The price depends on various factors, from venue to number of guests that are going, to food vendors and more. The price per head can range from $10 per person to as much as $150 per person for a more elaborate shower. That’s not counting bridal shower gifts, either.

A bridal shower costs anywhere from $500 to $2500 – it really depends on how extravagant you want the shower to be. Ask the person hosting and planning about expected costs to plan ahead if you are contributing.

There are ways to host a gorgeous, inexpensive bridal shower that your friend will still love and thank you for!

Where Should the Bridal Shower Take Place? 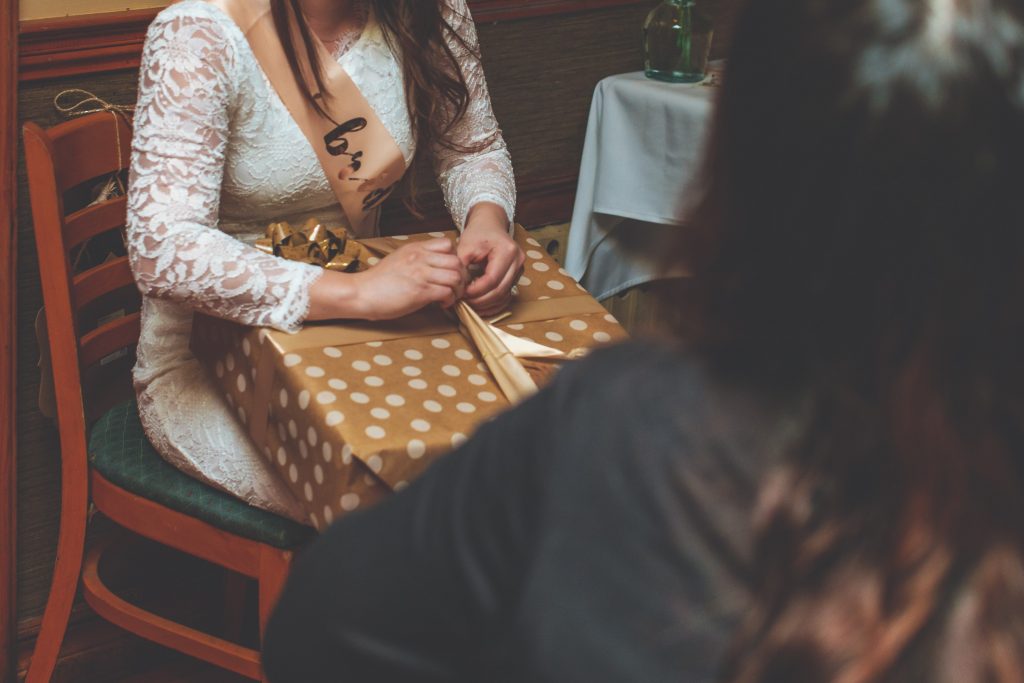 A bridal shower can be held almost anywhere. What’s important is the bride likes it. Therefore, if she’s always wanted to have a shower at a particular venue, you’ll want to honor her wish as best as you can.

It could be a specific place where a particular theme is available, at a restaurant she loves, a hotel event space, or simply at the backyard of a bridesmaid or another loved one. Of course, it will depend on the budget available and the type of shower.

Other factors to consider are the guests, the wedding party, and her location. Does she want an extensive colossal guest list or a few of her best friends?

Also, does she live close to her hometown or far away? If she lives near her hometown, then a shower in her hometown probably hosted by the family would make more sense.

If she lives far from her hometown, then it would be more sensible to have the event with nearby friends.

Similarly, if the bride-to-be lives in another state, yet most of her guests live locally. In such a case, instead of the entire guest list traveling to the shower, it may be more convenient if she hopped on a plane to attend.

When to Have the Bridal Shower 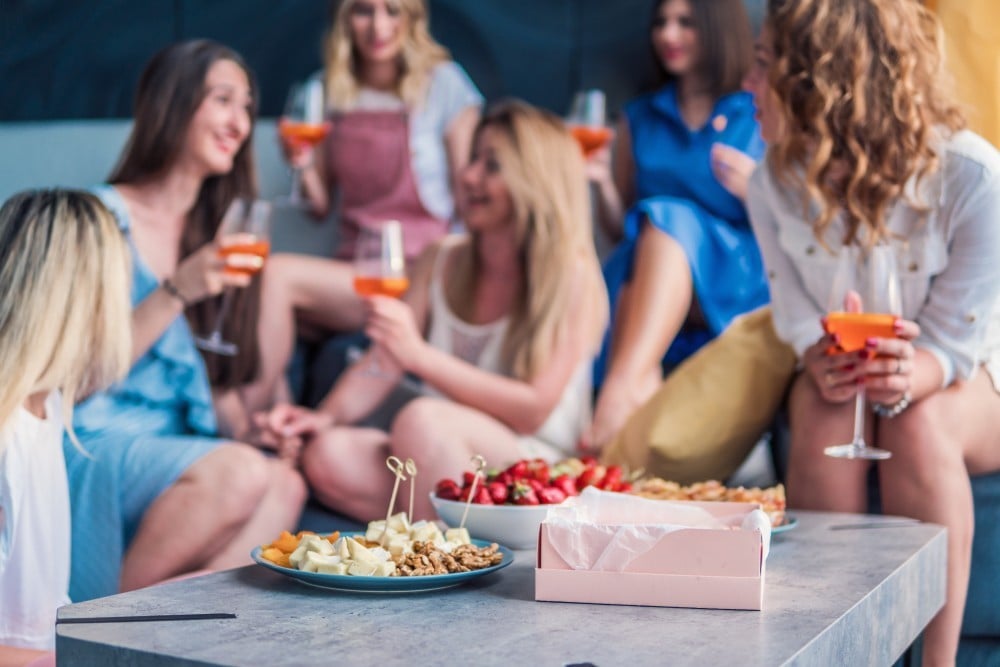 There’s no set-in-stone rule for when to hold the bridal shower, but it’s mostly held anywhere between three weeks to three months before the wedding.

Again, the bride’s preferences are a major determining factor when choosing the date, so try to pick a date that best accommodates her.

Also, consider the bridal party and as many guests as possible when selecting the date. Therefore, ensure you plan early, and more so if the guests are not local to give them ample time to make travel arrangements.

It’s also vital to get the timing right. Why? Plan it too far from the main event, and you risk people getting frustrated or losing anticipation for the wedding. I

f it’s too close to D-day, the bride will be preoccupied with the numerous wedding preparations for the wedding to enjoy her bridal shower.

What If It’s a Wedding Shower?

Though the responsibility of throwing a bridal shower often falls on the bride’s mother, her bridal party, or possibly the groom’s mother and other female family members, a wedding shower may deviate from the norm.

As couples who opt for a wedding shower are likely only having one party (it’s poor etiquette to have both a bridal and wedding shower), the responsibility can shift depending on who is in attendance.

If the party is for both the future newlywed’s friends and family, both sides of the wedding party may get together and handle the planning of the festivities. But more commonly, couples tend to take responsibility for their joint pre-wedding parties.

Similar to an engagement party, a wedding shower can involve all the elements of a bridal shower but expanded to celebrate both soon-to-be spouses.

We hope this information gives you a better understanding of bridal shower planning and your role. The bridal shower is a lovely occasion, and by putting some thought into it, it can be a memorable day that the bride, her bridesmaids, and other loved ones remember for years to come.